The M1907 Selfloading Rifle is a Codex Entry featured in Battlefield 1. It is unlocked upon obtaining ten kills with the M1907 SL. 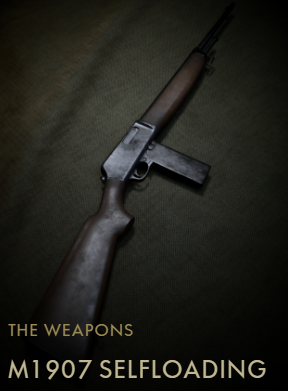 The Model 1907 selfloading rifle is one of the first true proto-assault rifles that saw widespread service in WW1. Production of the weapon began in 1906 and it was primarily intended as a hunting rifle, becoming quite popular due to its reliability. When WW1 broke out, many armies were looking for compact, rapid-fire weapons for use in aircraft and balloons.

France purchased several thousands of the M1907 and 1910 models starting in 1915, and Great Britain, Russia and the USA also used them. As aircraft machine guns made rifles obsolete, France pioneered the use of these weapons in trench warfare. Starting in 1917, they ordered over 2000 of what came to be called the 1907/17 model, equipped with a bayonet, up to 20-round detachable magazines, and in some cases converted to fully automatic fire.

Retrieved from "https://battlefield.fandom.com/wiki/M1907_Selfloading_(Codex_Entry)?oldid=343128"
Community content is available under CC-BY-SA unless otherwise noted.