The M1909 Benet Mercie is a Codex Entry featured in Battlefield 1. It is unlocked upon obtaining ten kills with the M1909 Benét-Mercié. 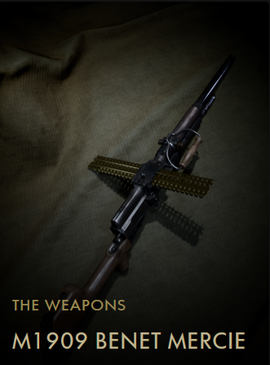 The French M1909 Benet Mercie was one of the earliest truly light machine guns. It was developed in 1907 and based on the standard French heavy machine gun which had been lightened significantly. It was adopted by a multitude of nations, including the Austro-Hungarian Empire, the British Empire, the USA, Belgium, Spain, Taiwan, and Sweden.

The Benet Mercie had only 25 major components and the modern feature that a damaged or overheated barrel could be replaced quickly. It was a machine rifle design with wooden buttstock, pistol grip, bipod and sometimes the addition of telescopic sights and butt monopod. It used unusual rigid metal strips that fed rounds horizontally. The M1909 was also used extensively as aircraft machine guns, and as a secondary armament in tanks. In this case, the butt was removed and the weapons were modified to feed from regular belts.

Retrieved from "https://battlefield.fandom.com/wiki/M1909_Benet_Mercie_(Codex_Entry)?oldid=343138"
Community content is available under CC-BY-SA unless otherwise noted.