450 m
"The M1911 is one of the most popular pistols in the world. Adopted in 1911 for the US armed forces, the M1911 served as the primary side arm through to 1985. Many clones and copies of the M1911 exist, and the internal action is used in nearly all modern pistols. Modernized and updated versions of the M1911 is still in use by MEU(SOC) US Marine Corps Special Forces."

The M1911 is a weapon featured in Battlefield 3. Unlike previous iterations, it is only available to members of the EA Gun Club or Battlefield Veteran. For Battlefield 3 the M1911 has been redesigned after the Marine's Force Recon M45 MEU(SOC) sidearm.

It features an 8-round magazine plus one in the chamber, and comes in four variants: standard, 'TACT.', 'SUPP.', and 'S-TAC'. The 'TACT.' variant adds a small flashlight to the weapon, the 'SUPP.' variant adds a suppressor, and the initially DICE exclusive 'S-TAC.' variant adds both.

The M1911 can be considered an intermediate pistol, having a unique damage figure and magazine size. One thing to note is that only one headshot is needed to get the full benefit of a two-hit kill, whereas the other pistols need both hits to be headshots.

The 'S-TAC' variant is the only pistol that can equip a flashlight and suppressor at the same time, and one of three handguns able to equip two attachments at the same time. (The others being the G17C 'SUPP.' and DICE exclusive .44 Magnum variant.) Note that only the stock and S-TAC. M1911 variants get a dog tag unlocked after 100 and 500 kills, while the TAC. and SUPP. don't.

The unique S-TAC. Variant of the pistol, previously only usable by employees of DICE, is now available to those who own the End Game expansion pack, and can be unlocked by completing the All About Precision assignment. 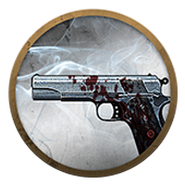 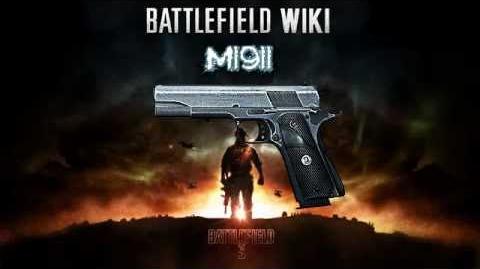 Battlefield 3 - M1911 Sound
Firing signature from the M1911 in Battlefield 3
Community content is available under CC-BY-SA unless otherwise noted.
Advertisement