The M1911 is a weapon featured in Battlefield 4.

It has moderately high damage, taking between 3 and 7 shots to kill. Its power makes it advantageous at close range, but its capacity is rather small, often taking the whole magazine to down an enemy at medium range.

Compared to the Compact 45, the M1911 is inferior when it comes to magazine size and rate of fire, but it has much higher accuracy, as well as lower recoil. Its recoil is mainly vertical, with little horizontal recoil. It may also be equipped with a 3x scope.

It is notable that the iron sights are misaligned, with the front sight being much lower than the actual point the bullet will impact. Using a Laser Sight, RDS, or scope will show the actual point of aim.

The M1911 is the only multiplayer firearm that has an achievement/trophy specifically linked to it. It is ".45 Old School", which requires 45 kills with the M1911 to unlock. 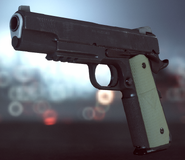 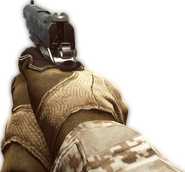 Iron sights. Notice the misalignment, rounds will hit in the empty space between the back posts instead of where the the front post is 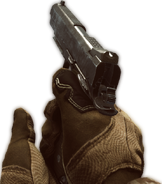 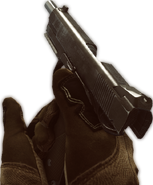