0.2
15
"A classic sidearm that has remained essentially the same for a hundred years. The .45 caliber round hits hard up close but damage falls off quickly."

The M1911A1 is a secondary weapon featured in Battlefield Hardline.

It is a purchasable handgun for the Law Enforcement Enforcer class. While reusing its model from Battlefield 4, the M1911's iron sights have been improved, being properly aligned with luminescent green dots.

The M1911A1 can be considered an intermediate between the stock 45T and the Bald Eagle, possessing slightly higher initial damage than the 45T but lower damage than the Bald Eagle. The weapon can perform more effectively in close and medium ranges than the 45T due to it having a significantly higher muzzle velocity and damage, and is only slightly slower than the .40 Pro and Bald Eagle's rounds. The M1911's recoil is primarily vertical with low side to side kick, and has only slightly more recoil than the 45T, making it easy to keep shots on target.

The M1911A1's primary downsides are its magazine capacity and drop off range. Notably, the M1911A1 has the shortest drop off start distance of the heavy pistols at 4 meters and ending at 20, (comparatively, the .40 Pro starts dropping off at 8 meters and ends at 25), making it less well suited to longer ranges than in previous games. It also has the second smallest magazine capacity at 8 rounds, three less than the 45T. Coupled with the fact that the pistol generally takes 3-4 shots to kill an enemy, the player should reload after every engagement and bring an Ammo Box to keep the weapon stocked up. 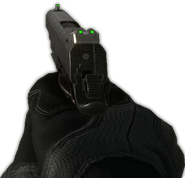 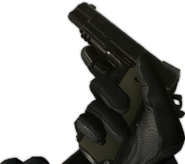 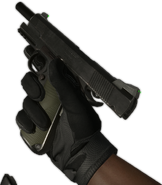 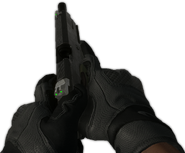