The Colt M1911 is a semi-automatic, magazine-fed, .45 caliber handgun. John Browning sold the original design to Colt, when it became the standard-issue side arm for the United States Armed Forces from 1911 to 1985, and is still carried by some US troops today, although it was largely phased out in favor of the M9. It fires the powerful .45 ACP round, which causes more tissue disruption than the 9mm Parabellum, but has more recoil and has lower ammunition capacity when compared to similarly sized 9mm handguns.

In Battlefield 1942, the Colt is the standard sidearm for the Allies (United States, United Kingdom and Soviet Union). It has an eight round magazine, medium damage and fair accuracy. It can kill in around three or four body shots, or two head shots. However, it still remains a last resort weapon.

The M1911 is the standard pistol issued to the American and South Vietnamese factions. It has a nine round magazine, medium recoil, medium damage and high accuracy. It can generally kill in three or four shots.

It should only be used as a last resort weapon in close-quarters situations, although, if prone or standing still, its cross hairs can be small enough for effective long range engagements, though its awkward recoil and deviation can make a moving target very difficult to kill. Aiming for the head is advised as it can kill in two head shots.

Compared to its NVA and Viet Cong counterpart, the TT-33, it has a slightly higher rate of fire and one extra round per magazine (the TT-33 has eight rounds) at the cost of slightly lower damage, as the TT-33 can kill with only two shots rather than the three shots of the M1911.

The M1911 as it appears in Battlefield Vietnam

Reloading the M1911
Add a photo to this gallery

In Battlefield 1943, the M1911 is a secondary weapon issued to the USMC Scout kit, opposite of the IJN's Nambu. It is a very weak weapon, requiring around five-six body shots to kill someone, meaning a player can only afford one missed shot.

It also has relatively long reload, so it should necessarily only be used as a last resort weapon. A common strategy would be to shoot an enemy with the M1903 Springfield, then finish them off with the M1911, as it will only require a single more hit with it to kill.

[3]
"A favorite sidearm among special forces this 7 round semi-automatic pistol boasts a .45 caliber stopping power enabling the operator to dispose of an opponent with lethal close range fire."

The M1911 is featured in Battlefield: Bad Company 2's multiplayer only, and is favored for its dependability and the power of its large .45 caliber round which gives it high damage. It comes unlocked by default with the limited edition of Battlefield: Bad Company 2, along with the Thompson, though it can still be acquired normally by being promoted to level 3 in-game.

It gains a large damage increase from Battlefield 1943 from six shots to about three-four in the body and two in the upper neck and head region. Many players will choose this flexible weapon over the MP-412 due to its higher firecap, faster recovery, slightly bigger magazine and in compensation, slightly less damage. However, it has a relatively small magazine (only seven rounds compared to the M9's 12 round magazine) and its sights are a bit less defined and therefore are slightly harder to use than other pistols.

The M1911's in-game description and stats evaluation.
Add a photo to this gallery

The WWII M1911 at Atacama Desert in Conquest.

An American assault trooper with the M1911 in Battlefield: Bad Company 2
Add a photo to this gallery

[3]
"A favorite sidearm among special forces this 7 round semi-automatic pistol boasts a .45 caliber stopping power enabling the operator to dispose of an opponent with lethal close range fire."

In Battlefield: Bad Company 2: Vietnam, the M1911 is one of the two sidearms available. It has a seven round magazine and performs exactly as it does in the base game, though it has a slightly different reloading sound and wears a war torn, 'battle-scarred' appearance.

The M1911's in-game description and stats evaluation.
Add a photo to this gallery

The render of the M1911.
Add a photo to this gallery

The M1911 featured in Battlefield Play4Free is aesthetically similar to the iterations found in other Battlefield games. However, its firecap is significantly lower and its firing sound is nearly identical to that of the M9 in the same game. It does, however, pack more punch per bullet, at the cost of a 7-round-magazine.

High Quality render of the M1911.
Add a photo to this gallery

The M1911 in Battlefield Play4Free

The M1911's iron sights
Add a photo to this gallery

The Veteran's M1911 comes with increased fire power, killing in 3-5 body shots, and extended magazine capacity of 10 rounds. The gun has a very rugged appearance and shows heavy use and comes at the cost of 750

It, along with a Veteran's weapon (depending on your class) and 25 each of Field Bandages and Adrenaline Shots were included in the New Recruit Kit deal for every class at the cost of 1475

High Quality render of the Veteran's M1911.
Add a photo to this gallery

The Elite's M1911 is an even further improved version of the M1911, with higher damage, larger magazine and cleaner appearance. The gun costs 1500

High Quality render of the Elite's M1911.
Add a photo to this gallery

450m
"The M1911 is one of the most popular pistols in the world. Adopted in 1911 for the US armed forces, the M1911 served as the primary side arm through to 1985. Many clones and copies of the M1911 exist, and the internal action is used in nearly all modern pistols. Modernized and updated versions of the M1911 is still in use by MEU(SOC) US Marine Corps Special Forces."

The M1911 is a weapon featured in Battlefield 3. Unlike previous iterations, it is only available to members of the EA Gun Club or Battlefield Veterans. For Battlefield 3 the 1911 has been redesigned after the Marine's Force Recon M-45 MEU(SOC) side arm.

It features an 8-round magazine plus one in the chamber, and comes in four variants: standard, 'TACT.', 'SUPP.', and 'S-TAC'. The 'TACT.' variant adds a small flashlight to the weapon, the 'SUPP.' variant adds a suppressor, and the initially DICE exclusive 'S-TAC.' variant adds both.

The M1911 can be considered an intermediate pistol, having a unique damage figure and magazine size. One popular thing to note is that only one headshot is needed to get the full benefit of a two-hit kill, whereas the other pistols need two headshots.

It is the only pistol that can equip a flashlight and suppressor at the same time, and one of three handguns able to equip two attachments at the same time. (The others being the G17C SUPP and DICE exclusive .44 Magnum.) Note that only the stock and S-TAC M1911 variants get a dog tag unlocked after 100 and 500 kills, while the TAC., and SUPP., don't.

The unique S-TAC Variant of the pistol, previously only usable by employees of DICE, is now available to those who own the End Game expansion pack, and can be unlocked by completing the All About Precision assignment. 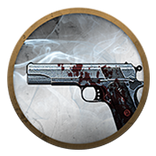 Side render of the M1911.
Add a photo to this gallery

The M1911 is a weapon featured in Battlefield 4. It was first seen in the kill feed of the multiplayer live stream at Gamescom 2013. Obtaining 45 kills with the M1911 will unlock an Achievement/Throphy.  In Battlefield 4 the M1911 may be equipped with a 3x scope.

Retrieved from "https://battlefield.fandom.com/wiki/M1911?oldid=224759"
Community content is available under CC-BY-SA unless otherwise noted.