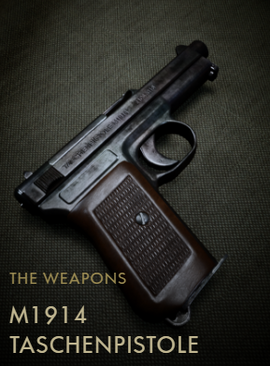 Both models were well-made and became quite successful and produced in large numbers. When Germany entered World War I they needed all the good firearms they could get their hands on, and the M1914 Taschenpistole was used by the German Army. After WW1 the almost identical M1934 model was produced and went on to be used by Germany in World War II.

Retrieved from "https://battlefield.fandom.com/wiki/M1914_Taschenpistole_(Codex_Entry)?oldid=343152"
Community content is available under CC-BY-SA unless otherwise noted.