The M1917 Enfield is a Codex Entry featured in Battlefield 1, introduced in the Apocalypse expansion. It is unlocked upon obtaining ten kills with the M1917 Enfield. 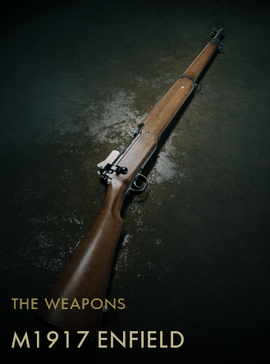 Even though the US M1903 was the official service rifle of American troops in WW1, it was actually heavily outnumbered by the US M1917 rifle, based on a British design. After the Second Boer War ended in 1902, the British army had doubts about the long range effectiveness of its SMLE rifle after having come up against Boer troops armed with German M1895 rifles with powerful rimless ammunition. So the British set up a commission to design a similar rifle and ammunition, and by 1912 it had produced the Pattern 1913, or P13 rifle, together with a rimless .276 cartridge. The P13 was heavily based on the German design, but the power of the cartridge produced heavy recoil and wore out barrels too quickly. The intent to replace the SMLE and the .303 cartridge was halted when WW1 broke out, but Britain needed more rifles than they could produce, so in 1915 three American plants were contracted to produce the P13 rechambered to the standard .303 cartridge, called the Pattern 14. The P14 served with the British forces as a second line and reserve issue rifle, and as a sniper rifle as it was found to be more accurate than the SMLE.

When the United States entered WW1 in 1917 they were not able to produce the M1903 rifle quickly enough, and as three American factories were just finishing production of the P14 for Britain, it was decided to adopt the P14 design and convert it into US .30-06 cartridge. This weapon became formally named "United States Rifle, cal .30, Model of 1917", with over 2,000,000 produced up until 1918, when about 75% of the American troops in Europe were armed with M1917 rifles. After some initial skepticism against it, the M1917 gained a reputation as a strong and accurate weapon with a great aperture rearsight. After WW1, many M1917 rifles were sporterized and became popular as hunting rifles, and during WW2 some M1917’s were used for training and as supplemental service rifles.

Retrieved from "https://battlefield.fandom.com/wiki/M1917_Enfield_(Codex_Entry)?oldid=343254"
Community content is available under CC-BY-SA unless otherwise noted.