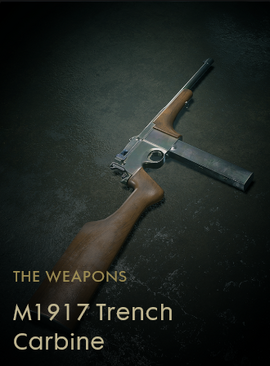 The C96 pistol fired powerful and high velocity ammunition, making it very popular as a carbine with detachable stock, where that power could be better utilized. Soon after the development of the C96 pistol there were versions with longer barrel, fixed stock and foregrip, like the commercial Jagdkarabiner and the Kavallerie Karabiner intended for the military. During WW1, the C96 was popular with trench raiders and stormtroopers, competing with the Lange Pistole 08 which could take a shoulder stock and 32 round drum magazine. In 1915, the German Army’s Rifle Examination Commission requested a new fully automatic weapon for stormtroopers, and a number of manufacturers submitted their designs.

In 1917, the C96 factory submitted their M1917 Trench Carbine for evaluation. It was based on the C96 and had a fixed stock and foregrip similar to their earlier carbines, with the key difference being its double stack, double feed 40-round detachable magazine. The M1917 was still semi-automatic like the C96, so it did not fully meet the specifications, but it was considered and tested by the German Commission. The 40-round detachable magazine made the M1917 an Impressive weapon, but it was expensive to manufacture and the German army feared that production of the Trench Carbine would impede production of other weapons from the factory, like the Gewehr 98, leading to only a few M1917 Trench Carbines being built. After WW1, most of them were destroyed due to being in violation of the Versailles Treaty.

Retrieved from "https://battlefield.fandom.com/wiki/M1917_Trench_Carbine_(Codex_Entry)?oldid=343247"
Community content is available under CC-BY-SA unless otherwise noted.