The M1919 SMG is a Codex Entry featured in Battlefield 1. It is unlocked upon obtaining 10 kills with the Annihilator. 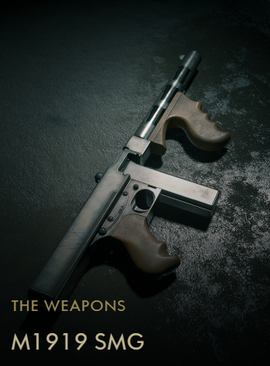 This weapon was intended to be a light machine gun that could easily be operated by a single soldier, dramatically increasing his combat effectiveness by swiftly firing up to 50-100 rounds from stick and drum magazines. The "Annihilator" was one of the first submachine gun designs that was able to integrate a friction-delayed blowback mechanism, enabling a high rate of automatic fire with .45 ACP pistol ammunition. Tests were promising but the war was over before the prototype could be shipped. A later model was eventually issued to the US Marine Corps that would gain notoriety as the favored murder weapon of American gangsters during the prohibition era.

Retrieved from "https://battlefield.fandom.com/wiki/M1919_SMG_(Codex_Entry)?oldid=371459"
Community content is available under CC-BY-SA unless otherwise noted.