For a list of similarly named arsenal, see M1

The M1 carbine served as a lighter and more compact alternative to the unrelated M1 Garand, and was typically issued to airborne infantry, vehicle crewmen, and rear line elements. It filled a role similar to today's personal defense weapons, offering greater firepower and range over standard sidearms like the M1911 or M1A1 Thompson but a larger magazine and better portability than the Garand. However, subpar firepower eventually lead to its replacement after the Korean War by the M14, though it continued to serve in some applications until the Vietnam War.

The M1A1 variant is a Paratrooper model of the M1 with a folding stock and pistol grip, and is the model of the weapon that appears most frequently in the Battlefield series.

30+1 rounds
The M1 is an all kit Carbine introduced alongside the Battlefield Hardline: Robbery expansion. Like the M1A1, which was released alongside the Criminal Activity expansion, the M1 does not require ownership of the expansion and is available to all players.

The M1 has less range than most of the other Carbines and Assault Rifles and is also only semi-automatic, but has high damage, making it a good mid-ranged weapon. Similar to the M1A1, the M1 Carbine is only able to equip weapon specific attachments and can only equip Metallic Paint. The M1 is able to equip a Stock, Stubby Grip, and Flash Hider.

Upon obtaining the first gold service star for the M1 Carbine, the "Grandpa's Automatic" achievement/trophy will be unlocked.

Equipped with its specialty Flash Hider, Stubby Grip, and Stock 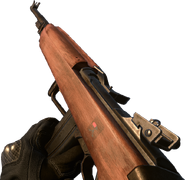 Symthic
"The M1A1 was one of the most iconic weapons of World War II. US troops loved it due to its firepower, light weight, and small size, and they tried to get their hands on it whenever possible."

The M1A1 Carbine is a Semi-Auto Rifle that was included in the game at launch, first appearing in the Devastation of Rotterdam trailer.

Aside from being obtainable from supply crates, the M1A1 Carbine is used infrequently by friendly Free French Forces during Tirailleur, as well as enemy United States Army Medics in The Last Tiger.

The M1A1 Carbine is unlocked for the Assault kit at class rank 5. The weapon is a four body shot kill up to 50m, a five shot kill out to 100m, and six shots beyond this. As such it, like the Gewehr 1-5, suffers at distance compared to most other semi-auto rifles. In addition, its low bullet velocity can hamper accuracy at range, but this can be buffed with High Velocity Bullets. The M1A1's primary advantages are its highest-in-class rate of fire at 450 RPM, and low per-shot recoil that allows users to make the most of its considerable output. These factors combined means the weapon is generally better suited to close range engagements and use of hip-fire than most other guns in the semi-auto class, but lacks their consistency at extreme range because of lower damage.

Its middling default magazine capacity of 15+1 rounds can be upgraded with the Extended Magazine specialization, doubling it to 30+1 and achieving best-in-class parity with the Gewehr 1-5. Its other specializations largely function to bolster the aggressive, mobility orientated playstyle afforded by the weapon's statistics. Recoil Buffer reduces vertical recoil to 0.696, while High Velocity Bullets increases projectile speed by a relatively small amount, from 610 m/s to 690 m/s.

The M1A1 is seen in the hands of the soldier to the left.

Symthic
"After the success of the M1 carbine this select fire version was developed that would allow fully automatic fire. The design was intended to deliver a similar firepower capability to the German fully automatic rifles in use at the time."

The M2 Carbine is an Assault Rifle variant, also used by the Assault class. It first appeared in the Battlefield V - Chapter 4: Defying the Odds Trailer. The weapon was originally to unlocked as a chapter reward for Into The Jungle, but was released early by mistake and is now available for all players from the start.[2]

With the exception of velocity, the M2 Carbine is statistically different from the M1A1 Carbine, most notable of which is the addition of select fire capabilities. It is also fairly distinct amongst assault rifles - whereas all of its contemporaries kill in four hits, the Carbine is a minimum five bodyshot kill. This means that damage is consistently lower than all other assault rifles regardless of range, however this is offset at close range by its very high rate of fire which allows for the second quickest minimum achievable time-to-kill in its class, behind the M1907 SL. Combat at range is further aided by relatively low recoil and semi-automatic capability. Magazine and ammunition capacity are also above average for the class, rounding out the weapon's versatility.

For Specializations, the two paths both provide bonuses for a mobility-orientated playstyle, with the left side sequence of Slings and Swivels, Enhanced Grips, Polished Action and Quick Reload giving boosts to hipfire accuracy and handling speed, as does the right side selection of Quick Aim, Ported Barrel, Custom Stock, and Lightened Stock. Ported Barrel reduces the already low horizontal recoil to 0.038 left and 0.263 right.

M2 Carbine in the Battlefield V – Into the Jungle Overview Trailer

Inspecting the weapon
Add a photo to this gallery

Sym.gg
"Equipped with an infrared spotlight and scope this converted M1A1 Carbine was intended for night fighting. Although the enhanced optics were cutting edge technology, the added weight made the rifle cumbersome."

The M3 Infrared is a semi-automatic rifle available for the Recon kit that was introduced in the 2020 Summer Update. It is unlocked by logging in before July 2nd, 2020. The rifle is statistically identical to the M1A1 Carbine, but with some unique characteristics - namely its infrared scope, suppressor and bipod.

Integral to the weapon is its 3x zoom infrared optic. This sight can assist with combat at range, but comes with notable disadvantages. Unlike IRNV scopes of previous titles, "hot" objects like players and vehicles are not illuminated, and it cannot be used to see through smoke. Without these features the grainy, monochromatic image provided by the scope can make it harder than usual to distinguish targets from the background. Furthermore, the weapon model is quite large, with the scope covering most of the right side of the screen, while when zoomed in the peripheral vision around the scope is completely blacked out, hampering situational awareness when using the M3. Offsetting this somewhat is the suppressor, which hides the directional damage indicator when hitting an enemy player, as well as preventing enemies from being alerting in Combined Arms.

Aside from its attachments, the M3 is special amongst Recon weapons because of its category. Its playstyle is similar to the Pistol Carbines, effective at short to medium ranges thanks to its high rate of fire, decent magazine capacity, and gradual damage drop-off. When set up, its bipod allows it to make the most of its high rate of fire, but the weapon remains competent when shooting on the move because of its low recoil. Its suppressor grants further utility by hiding their location in combat, and can be useful during both long-range sniping and aggressive infiltration.

The largest departure from the M1A1 Carbine is the M3's Specialization tree - although many of the upgrades are the same, their placement in the tree has been shuffled. Most conspicuously is the unavailability of Extended Magazines, which is replaced with Quick Reload at Rank 4.

Aiming down the sight.

Inspecting the left side.

Inspecting the right side.

Full reload.
Add a photo to this gallery

Retrieved from "https://battlefield.fandom.com/wiki/M1A1_Carbine?oldid=380598"
Community content is available under CC-BY-SA unless otherwise noted.