The M1 Garand is a semi-automatic battle rifle adopted by the United States Army as their official service rifle in 1936. Invented by Canadian American Immigrant engineer John Cantius Garand, It would be called "The Greatest Battle Implement Ever Devised" by General George S. Patton and serve the United States throughout World War II, The Korean War, and to some extent, Vietnam. It fires the .30-06 Springfield round which gives the rifle power comparable to bolt-action rifles utilized by other nations.

The design was so revolutionary and effective that while it was simply replaced by a modernized version, the M14 rifle in the late 1950s, descendants of the M14 are still in use today. The rifle utilized an en-bloc clip for loading, allowing an 8-round internal magazine capacity.

M1Garand
The M1 Garand is a weapon featured in Battlefield 1942 and is the primary weapon issued to the USMC Engineer kit, replacing the No 4 in patch 1.5v.

The difference between semi-automatic rifles and their bolt-action counterparts is their superior rate of fire, while retaining the latter's high damage profile of a two-shot kill to the chest and one-shot kill to the head. While this improved fire rate gives the user more of an edge at close range compared to bolt-actions, players should still attempt to limit engagements to medium or long range.

Spread wise, users will have to deal with spread increase per consecutive shot, requiring slight pauses between shots at longer ranges. Uniquely, semi-automatic rifles have deviation penalties while moving the crosshairs, however they are relatively minor and do not play much of a factor except at extreme range. Spread introduced by general movement and jumping is lower than bolt-actions, making the class slightly better for firing on the move.

An important thing to note is that the M1 Garand cannot reload while there are still rounds in the magazine. One must have an empty clip in order to do so.

When compared to its Japanese counterpart the Type 5, both guns have identical damage due to sharing the same projectile, as well as characteristics such as rate of fire, spread and recoil patterns. The M1 Garand has a faster reload by one second and a larger ammo pool by two rounds, while the Type 5 can hold two extra rounds in its magazine and can reload at any time.

The M1 Garand in first person

Inserting a clip during reload

In-game files
The M1 Garand is a weapon featured in Battlefield Vietnam World War II Mod as one of the two options for the Assault, Anti-Tank and Engineer kits. It has the same model, animations, and damage as its Battlefield 1942 counterpart, including the inability to reload without completely exhausting the loaded en-bloc clip. 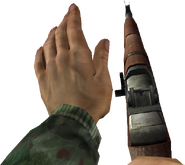 Finishing the reload
Add a photo to this gallery

3 shots to kill at all ranges
The M1 Garand is features in Battlefield 1943 as the primary weapon issued to the United States Marine Corps Rifleman kit. It is a high-powered rifle, capable of killing foes in three rounds to the torso or a single round to the head. Like the Type 5 of the IJN rifleman kit, to which the Garand is the counterpart, the weapon has a low firerate and small magazine capacity, which can limit its effectiveness in close quarters when compared to the submachine guns. The M1 Garand can also mount a Bayonet or rifle grenades.

The M1 Garand in Battlefield 1943 at Iwo Jima

The M1 Garand's iron sights.
Add a photo to this gallery

[3]
"The father of the M14 assault rifle, the inaugural standard issue semi-automatic rifle utilized by the US Army in WWII. This weapon is full value due to its awesome power and accuracy from long range."

The WWII M1 Garand is a weapon featured in the multiplayer of Battlefield: Bad Company 2 and is available to Battlefield Veterans. It is an all-kit weapon. Like in Battlefield 1943, the M1 Garand features a low rate of fire, moderate recoil, and high damage (on par with the M14 Mod 0 Enhanced), as well as a low magazine capacity. In many respects it is exactly the same as the M14 Mod 0, but with an approximately 33% longer reload time, as well as a slightly smaller magazine capacity.

It has a few small advantages over the M14 however; a slightly higher amount of reserve ammo and clearer iron sights, to compensate for the lack of attachments. Like the M14 and G3 battle rifles, the M1 Garand's kills count towards the Assault Rifle Efficiency pins. 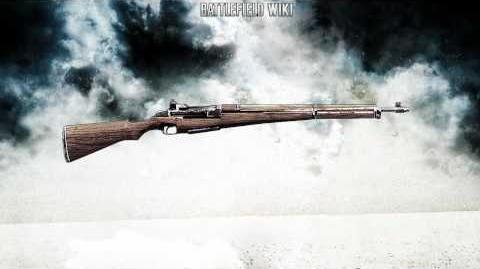 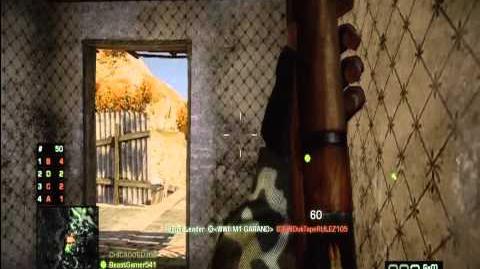 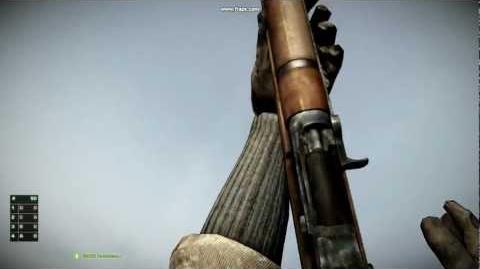 [3]
In Battlefield: Bad Company 2: Vietnam, the WWII M1 Garand is an all-kit weapon, and is exclusive to Battlefield veterans, just as in the base game.

When compared to the rifle from the base game, the M1 Garand's rate of fire is 20 rounds per minute higher, which, although seemingly small, is a huge improvement in the rifle's close range performance as the wielder can fire much faster due to the reduced time between shots. The weapon's damage drop-off starts off at four meters, further than in it was in the base game and it has slightly less acute recoil.

Its appearance has changed slightly to fit with the expansion's style. The metal pieces are more rusted and it is wrapped around with a cloth. Its sights have also changed, and are smaller, closer to those of the M14.

In all other aspects, the M1 Garand retains exactly the same stats as the one from the base game. 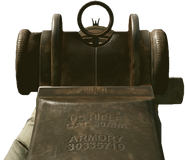 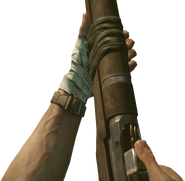 Relevant comparison between the M1 - M14

The render of the M1 Garand. 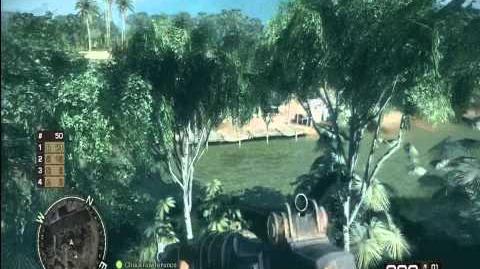 M1 Garand
Gameplay with the WWII M1 Garand in Battlefield: Bad Company 2: Vietnam at Phu Bai Valley and Operation Hastings in Squad Deathmatch mode
Add a photo to this gallery

War in the Pacific

Sym.gg
"A very reliable semi-automatic rifle that was standard issue for American infantry during the war. Probably best known for the en-bloc clip it utilizes, or rather the distinct sound it makes when the last round is fired."

The M1 Garand is a weapon featured in Battlefield V, added in the Tides of War chapter, War in the Pacific. The weapon’s iconic clip ejection "ping" can be heard at the end of the Chapter 4: Defying the Odds Trailer.

Statistically, the Garand can be categorised amongst the middle-range, clip-loading semi-autos of the Turner SMLE and MAS 44, it being a relatively high fire rate rifle with a potential to kill in three hits out to 30m, four at 100m and five at all other ranges. There are several minor differentiating characteristics however, with the most notable departure lying with the Garand's controllability, reloading method and capacity. By default the M1 features the lowest vertical recoil of any of the semi-autos, which allows accuracy to be maintained even at high fire rates. Muzzle velocity is also a respectable 780 m/s, outperforming the long range semi-automatics such as the Gewehr 43 in this regard. The weapon is also fed by an en-bloc clip, which prevents magazine "topping-up" possible on stripper clip fed rifles in exchange for a uniform partial reload speed, and faster empty reload. These favorable characteristics combined are paid for by an eight round magazine capacity - two bullets less than the standard fare - which limits the amount of targets the user can engage before reloading. Overall the soft recoil allows the user a higher degree of precision, required to make up for the reduced capacity.

Distinguishing itself further, the Specialization tree of the M1 Garand contains several unique upgrades as well as an unprecedented third option at Rank 4. The left side path of Quick Aim, Custom Stock and Lightened Stock emphasises accuracy and aim responsiveness, while the right side combination of Barrel Bedding, Quick Reload, and Enhanced Grips aids in a more aggressive playstyle with enhanced accuracy from the hip and reduced downtime when reloading.

The final upgrade decision is between Grenade Launcher, Heavy Load and Bayonet. The Grenade Launcher operates similarly to the M28 con Tromboncino, enabling the rifle to launch fragmentation Rifle Grenades by way of an alternate fire mode. When switching modes, there is a short animation while the adaptor and grenade round is attached to or removed from the muzzle. Upon firing and detonation on impact, the projectile behaves similarly in damage and blast radius to the dedicated Frag Grenade Rifle available to the Assault and Medic classes. The grenade is then reloaded. Two rounds are carried by default, up to a maximum of three. The Heavy Load specialization changes the damage profile to mimic the Gewehr 43. This upgrade greatly increases ranged potential by slowing damage drop off and extending the three-hit kill range to 100m, at the cost of increased per-shot recoil and reduced fire rate to 300 RPM. Finally the Bayonet attachment, of which the M1 Garand is the only semi-auto rifle compatible with, allows the player to conduct a Bayonet Charge, Easing closer ranged encounters or as a last ditch effort.

Retrieved from "https://battlefield.fandom.com/wiki/M1_Garand?oldid=376869"
Community content is available under CC-BY-SA unless otherwise noted.