The M21 Sniper Weapon System, abbreviated as the M21 SWS or simply M21, is a marksman rifle adaptation of the M14, designed in 1969. The United States Military chose the M14 for its reliability, accuracy, and the power of the 7.62mm cartridge to become its primary marksman rifle following the Vietnam war. The modification was achieved by simply attaching a 3-9x variable zoom optic and by using National Match-grade ammunition with the weapon. It was the U.S. Army's primary marksman weapon until 1988, when it was officially replaced by the M24, but still saw some use during the Iraq War. Additionally, a newer version of the rifle, the M25, is used by some special forces units.

In Battlefield Vietnam, the M21 is an option for the ARVN and US Army Scout kits. It has a 10-round magazine, high recoil, high damage, high accuracy and a medium rate of fire. It can kill in 2-3 shots, or a single head shot. It is equipped with a 6X scope meant for long range engagements. It can be considered an equivalent to the NVA SVD.

When using the M21, one should go for sniping at long ranges, because, despite its small cross hairs, hip firing can be a wasteful and ineffective, even in close quarters. When sniping, naturally, aiming for the head is recommended, for easier kills and especially conserving ammo, as the M21 only comes with 2 spare magazines. Generally, manually reloading with the M21 in unadvised unless there is very few rounds left in the current magazine. A good way for ammo conservation would also to be set up near an Ammunition Box.

In Battlefield Heroes, there are two sniper rifles that are based on the M21, being the Tier 1 Elite M-21 and the Winter Camo M-21. They are statistically identical to each other. 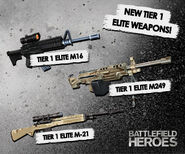 "This light and fast sniper rifle's winter camo paint job is perfect for battle on the new snowy maps. Performs on par with the M-21."

The icon for the Winter Camo M-21.

The render of the Winter Camo M-21.

[1]
"The U.S. Army needed a sniper rifle in Vietnam and refitted high quality M14s with scope and match grade ammunition. Designated M21, this remained the primary sniper rifle until 1990."

In Battlefield: Bad Company 2: Vietnam, the M21 is a sniper rifle issued to the Recon kit. The M21 is semi-automatic and has a 10-round magazine. It uses a sniper scope, with a notably lower zoom that the other sniper rifles, and it allows for more peripheral vision, similar to the 4X Rifle Scope. It is identical to the SVD in stats, the only difference being its scope. Because of the weapon's low powered scope and good peripheral vision it is much more suited for close to medium range combat than the M40 or SVD.

The view through the M21's scope.

A US Army recon wielding the M21 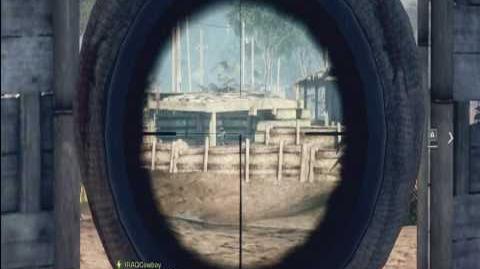 M21
Gameplay with the M21 in Battlefield: Bad Company 2: Vietnam at Phu Bai Valley in Hardcore Rush and Operation Hastings in Hardcore Conquest
1/4