The M24 SWS (Sniper Weapon System) is used by snipers in the United States Army. It is a Bolt-action rifle that chambers the 7.62×51mm NATO, .300 Winchester Magnum, or the .338 Lapua Magnum. The M24 SWS is one military variant of the Remington 700, "M24" being the model name assigned by the United States Army after adoption as their standard sniper rifle in 1988. The M24 is referred to as a "weapons system" because it consists of not only a rifle, but also a detachable telescopic sight and other accessories. The M24 SWS is no longer in service, as it has been converted to the M2010 ESR.

3.5
"The M24 sniper rifle replaced the older M21 in the late 1980's. The United States returned to bolt action sniper rifles with this lightweight weapon. It has an effective range of nearly 1000 meters."

The M24 is the default sniper rifle for the United States Marine Corps in Battlefield 2. It is the only sniper rifle whose spread values differ from the other rifles of the same class; its zoomed spread is half of the normal value -- 0.025 versus 0.05. Otherwise, however, its spread is identical to the other rifles. It is most similar to the L96A1, whose rate of fire, damage, and magazine size are identical to the M24's. Both rifles are always capable of killing in two direct hits, at a maximum, with a minimum of one headshot for an instant kill.

In the Special Forces expansion the M24 is issued as the default to the Special Air Service and United States Navy SEALs and has identical stats to the M24 in the base game. 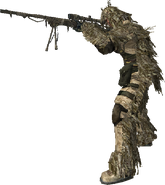 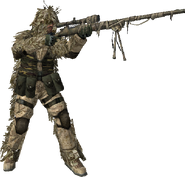 The M24 in Battlefield: Bad Company on the multiplayer map Par for the Course

[1]
"Originally designed to use the .30-06 Magnum cartridge it was eventually re-chambered to use the 7.62 round. This did not reduce the range or the stopping power as the M24 still is popular with sniper teams worldwide."

The M24 Sniper is the default sniper rifle in Battlefield: Bad Company 2 for the Recon kit. Despite being the first Recon weapon available, the weapon inflicts high damage (headshots at any distance and any shots at close range are instant kills, while other shots at long range require two hits). This comes at the cost of low rate of fire with the bolt action and a small 5-round magazine.

The M24 is equipped with a 6x telescopic scope by default, however a 4X Rifle Scope, 12X High Power Scope, Red Dot Sight, and/or spotting scope can also be used. The weapon has slight bullet drop and flight time to reach targets at extremely long ranges, which means that the player must anticipate the movement of the target and lead the shots as well as aim slightly upwards. Attaching a Red Dot Sight or 4X Rifle Scope to the weapon will cause the bullet drop to seem to disappear (due to the player tending to engage at closer ranges), although it is still present. The 6x and 12x scopes magnify the bullet drop as well as the target.

The M24 is best suited for medium-long range combat, being able to easily win in a firefight at that distance. Its high magnification scope also means that spotting enemies with the weapon is very easy. The M24 has limited effectiveness in close quarters because of the low fire rate, however the target will be killed if hit with one shot. Because of its effectiveness, new players may find this the easiest sniper rifle to get used to and many players continue to use this as their main sniper rifle even after unlocking all the other Recon weapons.

One frame from the reload animation

The furthest an enemy can be for the M24 to do its highest damage at 10m.

The closest that an enemy can be for the M24 to do its lowest damage at 36m.

The M24 is a weapon in Battlefield: Bad Company 2 iOS.

The M24's scope in the Battlefield: Bad Company 2 iOS.

alchemical.cc
"Originally designed to use the .30-06 (thirty odd sixty) Magnum cartridge the rifle was eventually re-chambered to use the 7.62mm NATO round. This however did not detract from the range or the stopping power as the M24 still proves popular with sniper teams worldwide."

The M24 is a sniper rifle that is featured in Battlefield Play4Free. It deals higher damage than most sniper rifles and has the largest magazine of bolt-action sniper rifles, along with the SV-98. The M24, GOL, L96A1, M82A3, and the M95 are the only sniper rifles that can kill with only one headshot at any range.

The Veteran and Elite variants of the M24 have unique aesthetics and offer increased magazine size and damage.

The M24 in Battlefield Play4Free.

Detailed model of the M24

The M24 Sniper is a weapon featured in Battlefield Online.

Default Underbarrel
Bipod
"The M24 weapon system is a bolt action rifle firing 7.62 NATO round. Standard equipment includes the 6x telescopic scope, but a variety of optics can be fitted to the system for various needs."

The M24 Sniper is a weapon featured in Battlefield 2042. It is available exclusively in the Battlefield Portal for the BC2 Recon class.