The M26 Modular Accessory Shotgun System (MASS) is a developmental under-barrel shotgun attachment for the M-16/M4 family of United States military firearms. It can also be fitted with a pistol grip and collapsible buttstock to act as a stand-alone weapon.

The M26 MASS is a militarized version of the Lightweight Shotgun System, developed by C-More Systems and manufactured by Vertu Corporation and originally marketed toward special operations forces. It attracted the interest of soldiers being deployed to Afghanistan who wanted to reduce the number of individual weapons they had to carry by using a shotgun as a rifle attachment instead of a discrete, separate weapon.

36 rounds
"The M26 Lightweight Shotgun System was developed to replace older, more cumbersome breaching shotguns. Available as a standalone shotgun, or capable of being mounted on some Assault Rifles with Underslung Rails, the M26 is able to fire Shot, Flechette, Frag, and Slug rounds."

The M26 MASS is an Assault class underbarrel attachment or stand-alone weapon that is unlocked after reaching 38000 Assault score. It is a straight-pull bolt-action shotgun which is located on the left side of the weapon. The gun itself features similar iron sights to the PDW-R, P90 and Mk11 Mod 0.[1] It can use the following types of ammunition, unlocked in this order:

An important thing to note about the M26 MASS in comparison to other shotguns, is that it is noticeably more quiet and, in a hectic firefight, can be difficult for enemies to distinguish from background sounds, making it extremely useful for flanking maneuvers. While not having quite as fast a rate of fire as other shotguns, the MASS can still prove a handy addition when coming around corners or sneaking up on enemies. The M26 MASS is better suited for close quarters combat than the M320 BUCK. The M26 MASS fires 12 pellets/darts per Buckshot/Flechette shell, same as the 870 MCS.

It should also be noted that while aiming down sights with the Underslung Rail and the M26 MASS on compatible guns, the player will use their primary weapon's iron sights or other optics attached, in addition to being able to use third-tier attachments such as the laser sight.

The M26 MASS being used in Operation Métro.

"Compact shotgun capable of being mounted below the barrel of some Assault Rifles."

The M26 MASS is a gadget featured in Battlefield 4 as an Assault class under-barrel attachment or stand-alone gadget. It fires 12 Gauge Buckshot, with other ammunition types unlocked by progression with the Assault kit. Separate stats are kept for each ammunition type in Battlelog.

Unlike in Battlefield 3, the standalone M26 MASS is equipped with a Reflex (RDS) by default, with no iron sights available. An underslung M26 MASS can use the same accessories as its attached weapon, aside from barrel modifications.

For purposes of progression, the M26 MASS contributes to the player's Shotgun score. Since it is unlocked by the Assault class, shotguns other than the QBS-09 can be unlocked using the M26 MASS. 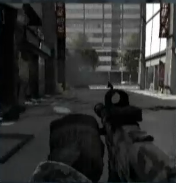 The M26 MASS from a commander's view, equipped with a reflex sight