No recoil
Causes burn damage once target is on fire

[1]
"Portable flamethrower capable of producing a jet of burning fuel. Ideal for clearing out bunkers and other tight spaces."

The Flamethrower is a weapon featured in Battlefield: Bad Company 2: Vietnam and issued to all kits. It has a limited amount of fuel (300 "rounds"), but this allows a continuous spray of fire until it runs out. It doesn't have a reload animation. Any spare gas will be instantly loaded once the reload button is pressed.

Once a player is hit by the Flamethrower, they will be set on fire, which will continue to gradually deal damage for 7 seconds. Players can extinguish the flames with a medkit, by moving into a source of water, or wait seven seconds after which the fire will disappear automatically, though the latter option will cost the player around 50 hitpoints. Players can achieve headshots with the flamethrower, though this does not affect damage, unlike other weapons.

Firing continuously can be effective as it doesn't require a reload and ammo is rarely ever a concern, though it can block the player's view. The Flamethrower is effective for clearing tight and narrow areas, like buildings, bunkers and tunnels, though it has a very limited range, and is unable to engage enemies at long range. The flamethrower's fire takes a rather long time to reach its maximum range, hence it will often be beaten by conventional bullet weapons at medium range.

The flamethrower is a larger threat in hardcore mode, as it takes a very short time to kill, and simply setting an enemy on fire with a single hit will be enough to kill them, granted they do not extinguish the flames beforehand or have Ceramic Body Armor equipped.

It can also be used to clear vegetation which is useful for rooting out enemy soldiers in some of the more jungle orientated maps such as Cao Son Temple and Hill 137.

The Flamethrower's in-game description and stats evaluation.
Add a photo to this gallery

The Flamethrower at Hill 137.

Flamethrower in action at Hill 137

US soldier armed with an Flamethrower beside an M48 Patton

US soldier uses the Flamethrower against NVA soldiers

The furthest an enemy can be for the Flamethrower to hit at 15m. 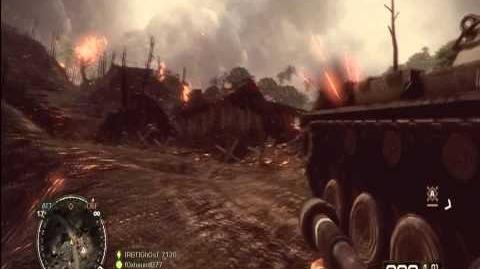 M2
Gameplay with the Flamethrower in Battlefield: Bad Company 2: Vietnam at Hill 137 and Vantage Point in Rush mode
Add a photo to this gallery

Retrieved from "https://battlefield.fandom.com/wiki/M2_Flamethrower/Bad_Company_2?oldid=364735"
Community content is available under CC-BY-SA unless otherwise noted.