In the pre-packaged World War II mod, the M2-2 Flame Thrower is a flamethrower issued to USMC flamethrower kits. The weapon has 100 "rounds" of ammunition, and has no refills in reserve, though it will be automatically refilled when the player is near an Ammunition Box. It has a limited range, and the flames it fires act very similarly to the Napalm of the base game. It is most effective against infantry on ground, as it kills fast and can dispose a group of enemies quickly. It can also be used against enemies in water, though the flames will naturally not settle. The flamethrower can damage vehicles, and is effective against light vehicles like half-tracks and cars. It is not very powerful against tanks, and will mostly result in a waste of ammunition against them.

It is statistically identical to, and the counterpart of, the Type 100 flamethrower. 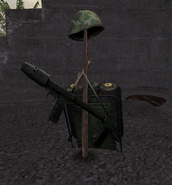 The M2-2 Flame Thrower firing
Add a photo to this gallery
Retrieved from "https://battlefield.fandom.com/wiki/M2_Flamethrower/Vietnam?oldid=364734"
Community content is available under CC-BY-SA unless otherwise noted.