The M2 Selectable Lightweight Attack Munition (SLAM) is a "smart" anti-tank mine equipped with magnetic and infrared sensors to detect the presence of vehicles and attack from either the top or side of the mine. Upon detonation, it propels a copper explosively formed penetrator at high velocity to penetrate up to 40mm of armor. It weighs only one kilogram, making it easily man-portable.

6.0 - 6.1 meters
"Selectable Lightweight Attack Munition usable as either an off-route Anti-Tank mine or a traditional land mine. Blast damage is less than the M15, but is still capable of a Mobility Critical on heavily armored vehicles."

The M2 SLAM is an available weapon gadget which can be utilised by the player in the missions, Shanghai and Singapore. They are available for use from gadget crates places in certain areas of the map and can be used to damage or destroy enemy vehicles.

The AT Mine is an available weapon gadget for the Engineer kit unlocked at 74000 Engineer score.

To operate, the player must press the gadget selection button to which the gadget is bound. To deploy, the operator must press or click the primary fire button. Pressing it repeatedly can allow the operator to deploy multiple landmines quickly. As with C4 Explosives or Anti-Tank Mines, friendly landmines are highlighted and indicated with a blue point HUD display. Enemy deployed landmines are not highlighted or marked until they are 'spotted', even in Hardcore game modes. The IRNV scope and Thermal Optics can easily detect the gadget as they glow white as though they were producing heat. The gadget's explosive and proximity sensor effects cannot be negated by Active Protection systems.

While the explosive force of the gadget against vehicles, especially upon direct-contact or when detonated under the chassis is considerable, it is less damaging than the Anti-Tank Mine but unlike the latter, it can be stuck to roof, ceiling or wall surfaces. It is powerful enough to instantly destroying most light vehicles but will require multiple or all M2 SLAMS to disable or destroy heavy armor. The gadget is also an excellent area denial tool such when placed on top of hills or ramps, where armored vehicle's limited gun traverse disables them from aiming and dispatching the land mines with ease without either forcing them to exit the vehicle to remove them or requiring others to do the same. The M2 SLAM are best utilised in high-traffic vehicle areas, especially on roads made of concrete or dirt where debris, shadows or even smoke can mask the mine's presence. Due to its functionality, the M2 SLAM is also fully operational underwater, on top of doorways or even concealed easily amongst battle debris due to its small profile. If required, operators of the gadget can even deploy them on top of Infantry Transport Vehicles to create VBIEDs (Vehicle-Borne Improvised Explosive Devices). Due to the gadget's nature however, 'spotted' landmine HUD icons moving across the battlefield tend to attract suspicion and draw attention to the VBIED, and can usually result in fast enemy counter-action upon identification.

The gadget can be removed, disarmed or even "Hard-Defused" by destroying it with weapons of any kind. For Engineers, the default 'Action' button can be used to pick Landmines and other explosives off the ground. The Engineer's repair-tool and EOD Bot can also disarm mines in the same manner. All personnel can detonate the mines using explosives, including grenades, or shots from sniper rifles, pump-action shotguns, 12 Gauge Frag or 12 Gauge Slug equipped automatic-action shotguns or from the .44 Magnum or MP412 REX. If a mine belonging to an enemy Engineer is detonated within reach of an enemy vehicle, the mine will damage the vehicle—any kills, disables, or destruction will be awarded to the player that destroyed the mine. Extra landmines can be obtained from Ammunition Boxes or Commander Supply Drops, taking at least 8 seconds for each gadget recovery. The operator can also choose to stack all 3 or 6 landmines on top of each other to trick approaching hostiles into believing there is only one landmine present, dealing a damage boost and instant destruction against all vehicle types which set it off.

If the mines' operator is killed, the gadget persist on the battlefield until destroyed/removed. The mines disappear in ascending order when the player already has 6 mines up and deploys more. M2 SLAMS cannot be set off by friendly vehicles, but can still damage them if set off by other means (passing enemy vehicle, enemy explosives). AT mines can be detonated by friendly soldiers even when friendly fire is disabled. Like Anti-Tank Mines, the gadget can be set off and destroy friendly vehicles and assets and cannot discern the difference and due to these shortcomings, it is not recommended to use such gadgets in Hardcore game modes anyway.

The following is a list of effects and damage to specific vehicle types from the M2 SLAM mine detonation. Vehicles not listed are vehicles which are instantly destroyed upon detonation. Such includes Quad bikes and PWCs.

Damage resulting of detonation both underneath the chassis and direct-contact are consistent. Results caused by splash-damage is not included.

Damage results are gathered post-2015 Battlefield 4: Legacy Operations update and are subject to change without notice by game developers from time to time. 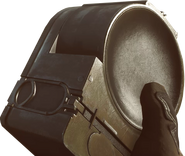 M2 SLAM on the ground 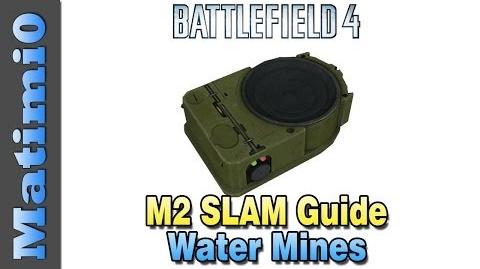 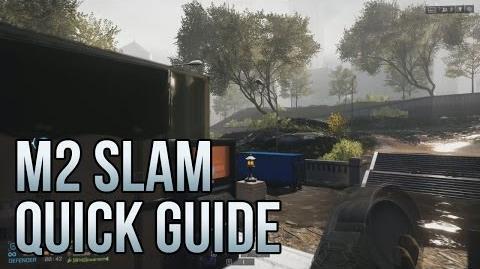 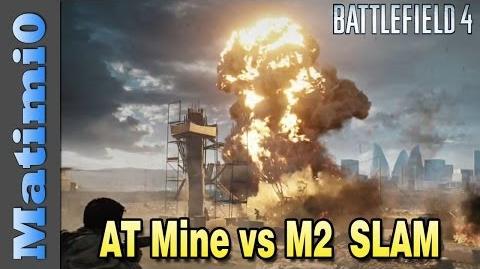 AT Mines vs M2 SLAM Guide - Which is Better - Battlefield 4