The M40 is a bolt-action sniper rifle designed in the mid-1960s by U.S. Marines who were modifying Remington 700s during the Vietnam War. It fires the 7.62x51mm NATO rounds at an effective range of up to a maximum of 1000 yards. The M40A5 variant is an modernized variant with a threaded barrel and detachable box magazine currently in use with the United States Marine Corps.

The M40 is issued to USMC and MACV Scout kits on certain maps. It has very high multipliers, a low rate of fire, high recoil, good accuracy and a 6X scope meant for long range engagements. Its high damage can kill an enemy in 2 body shots or a single head shot and its accuracy will make it so it can easily hit a target from 200–250 meters away. Although being difficult to use in close-quarters due to its low rate of fire, the small cross hairs and high damage can prove to be effective when no-scoping and engaging enemies in such situations.

The M40 as it appears in Battlefield Vietnam

[1]
"A modified version of a strong and simple design, dating back to the 1940s. It first saw action in Vietnam, and has since undergone several updates and is in service to this day."

In Battlefield: Bad Company 2: Vietnam, the M40 is a weapon issued to the Recon kit. It is the only bolt-action sniper rifle featured in the expansion pack. It is capable of one-hit kills at all ranges in Hardcore mode, even without Magnum Ammunition, due to its minimum damage being 70. It is equipped with a 6x scope by default, but it can equip a 12X High Power Scope instead if the player chooses said specialization.

On the left side of the rifle, one can see that it says "Hell Sucks!" scratched in. 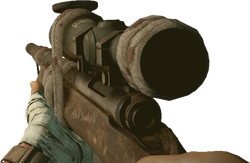 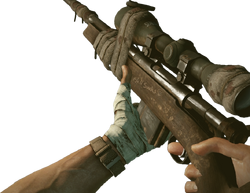 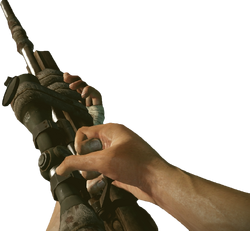 The view through the M40's scope.

Bigger render of the M40.

http://symthic.com/?s=bf3 Retrieved Oct. 25
"Developed around the Bolt-Action of a proven American hunting rifle, the M40A5 has been upgraded with a lightened fiberglass stock, a detachable magazine, and the provisions for mounting suppressors. An incredibly accurate rifle, the M40A5 currently serves as the primary Sniper Rifle for the USMC. The M40A5 is by default equipped with a Rifle Scope (8x)."

The M40A5 is a weapon featured in Battlefield 3 and is rather modernized compared to older variants.

During the campaign it is the starting weapon in Night Shift, it is equipped with a IRNV scope, Straight Pull Bolt and a suppressor. It can kill any enemy in one shot no matter what body part the bullet hits. It also has more reserve ammunition than its Multiplayer counterpart.

In Multiplayer the M40A5 is the third sniper rifle unlocked for the Recon Kit. It has a higher rate of fire than any other Bolt-action in-game, but suffers the slowest bullet speed compared to any other bolt-action. This can make it an optimal choice for a close range sniper due to its rate of fire (which increases when Straight Pull Bolt is attached).

Compared to the SV-98, the bullet velocity is slightly lower, but damage is universally higher. The higher damage allows the M40A5's 59 damage to one-shot kill any part of the body in Hardcore whereas the SV-98's 50 damage will only one-shot kill the chest and up.

The M40A5 in the singleplayer level Night Shift.

M40A5 with no optics 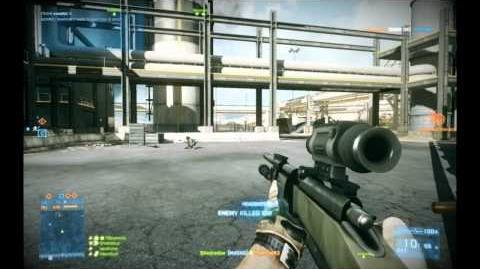 The M40A5 appears as one of the four selectable primary weapons in Battlefield 3: Aftershock. The gun holds one round per magazine and its total ammo count is 20 rounds.

The M40A5 in the weapon selection screen.

http://symthic.com/bf4-weapon-info?w=M40A5
The M40A5 appears in Battlefield 4. Similar to Battlefield 3, it boasts the fastest rate of fire and the second fastest empty reload of all bolt-action rifles, behind the Scout Elite reload speed, but has a smaller magazine capacity and the second lowest muzzle velocity to balance this. 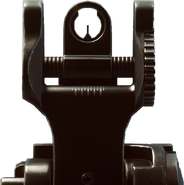 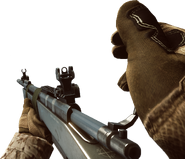