The HK416 is a German Assault rifle developed by Heckler & Koch in 2004. The HK416 shares lower receiver, magazine, receiver extension, grip, trigger assembly and stock with normal AR-15 rifles, like the M16 and M4 carbine, leading to a level of parts commonality, weapon familiarity and relative low cost. The HK416 uses a short-stroke piston design from the G36 that cycles the bolt carrier, instead of the direct gas impingement system used by the AR-15, which prevents carbon build up inside the bolt carrier to avoid weapon failure and increase reliability and lifespan of the weapon. It is currently in use by many countries around the world including, but not limited to, the United States, Norway, Poland, Singapore, and Turkey.

Battlefield: Bad Company Official Prima Guide
"The M416 is an upgraded version of the M4 and M16 assault rifles. With new firing mechanics, this modification solved many of the performance issues with the old weapon systems, and also proved to be a more cost effective solution than replacing the huge number of aging rifles in service."

The M416 is a weapon featured in Battlefield: Bad Company.

The M416 is the first weapon the player starts with in every mission (except for Crash and Grab, where the MP-443 Grach takes its place). Marlowe and Redford always have it in cutscenes. The soldiers of Juneau convoy in Welcome to Bad Company are equipped with the M416, possibly implying it is the standard service rifle of the US Army.

The M416 is the default assault rifle issued to the American Assault kit, and is the American counterpart to the Russian AEK-971 and MEC AUG. It has average stats and is capable of killing in 8-10 shots. Like every other assault rifle in the game, it has a 50-round magazine, 150 rounds in reserve and an M203 grenade launcher. Compared to other assault rifles, it has very clear iron sights which are good for pinpoint accuracy.

The M416 in Battlefield: Bad Company, on the multiplayer map Oasis

The M416 in an earlier build of Battlefield: Bad Company. Note the Woodland Camo that was not kept in the final release.
Add a photo to this gallery

"A German creation, the 416 Assault rifle was built as a solution to the M4/M16 outdated weapon systems. The modifications guard against malfunctions and prolongs the life of parts."

The M416 is a weapon featured in Battlefield: Bad Company 2 as the sixth assault rifle issued to the Assault kit, requiring 35000 points to unlock. It has a 30-round magazine with a grenade launcher, and can be further modified with a Red Dot Sight or 4X Rifle Scope. It boasts all-around effectiveness, but is still outclassed by SMGs and shotguns at close quarters and semi-automatic rifles at longer ranges.

Compared to its close counterpart, the AUG, the M416 is slightly superior in recoil control, reload time and minimum damage. It is equal in maximum damage per second and slightly inferior to the AUG in hipfire spread. The weapon's good and balanced stats give it an easy learning curve and excellent versatility making it a popular assault rifle.

While the iron sights are clear and open, it may be advisable to equip a Red Dot Sight or a 4x Scope on the M416 as the bullet trajectory actually travels higher than the end of the front post sight.

4X Rifle Scope.
Add a photo to this gallery

The M416 is a weapon in Battlefield: Bad Company 2 iOS.

The M416 in Battlefield: Bad Company 2 iOS.
Add a photo to this gallery

1249 (No longer Only through Daily Draw as of re-balance)

The 416-Carbine is an Assault Rifle featured in Battlefield Play4Free.

The 416-Carbine has the best range of the assault rifles, tied with the AN-94 for long range, but an increased close range distance by ten meters. However, it deals much lower damage and has noticeable recoil. It has 20 rounds per magazine, same as the M4A1, but comes with 1 less magazine than the former upon spawning. Aesthetically, the weapon has the typical black finish of regular weapons, and the sights closely resemble those of the MP5 and ﻿G3A4.

The 416-Carbine has a similar appearance to the M27 IAR in the same game, but the M27 has an unusable bipod attached and longer magazines.

416-Carbine as it appears in-game

http://symthic.com/?s=bf3 Retrieved Sept. 13th
"The M416 was developed by a famous German weapons manufacturer as a more reliable version of the classic M16. The weapon is essentially a fusion of the M16 and the G36 Assault Rifles. The M416 is reliable and accurate, with a moderate recoil and rate of fire that makes for an effective all around weapon."

The M416 is a weapon featured in Battlefield 3.

The M416 appears as the starting weapon of Henry Blackburn during the mission Rock and a Hard Place with an ACOG and M320 GLM. The M416 re-appears in the mission Kaffarov when the gameplay shifts to Blackburn's POV, but the M320 is unusable.

The M416 is the first unlockable weapon of the Assault kit at 22,000 Assault score. It boasts the same damage as most other assault rifles, mild recoil, and fast reload times for both empty and partially-full reloads much like the M16A3. The M416 has less tendency to kick rightwards than the M16A3, allowing for better recoil control during automatic fire. The accuracy is particularly high, also comparable to an M16A3. It also has a lower first shot recoil than the M16A3, but a higher first shot recoil than the AK-74M.

It is nearly identical to the M27 IAR, which is based off the M416, although the M416 has a smaller magazine, a shorter barrel, and differs in accuracy and recoil.

As of the December Soldier Upgrade, premium members will be able to equip the Airman Camo on the M416 by default and can also equip the Woodland Stripe Camo once the M416 Specialist assignment is completed.

M416 in Third-Person view.
Add a photo to this gallery

The M416 is a weapon featured in Battlefield 4.

It can be unlocked for singleplayer missions by completing the Bronze assignment in Tashgar by scoring 5,000 points. It is fitted with a Reflex, Magnifier, Angled Grip and Heavy Barrel. It features an ERDL Woodland paint.

The M416 is the second Assault Rifle unlocked for the Assault kit, after the SCAR-H and the default AK-12 and AN-94. Much like in BF:BC2 and Battlefield 3, it is a very balanced weapon, a middle ground between the other assault rifles, and hence is versatile for many situations.

It has a moderate firerate at 750 RPM, average damage, good accuracy and a quick reload. Its recoil is average, similar to the AK-12 but with a slight rightwards pull. Like the other American and Western European weapons, it unlocks the US attachments. The Chinese and Russian attachments are unlocked through Battlepacks.

The M416 in first person 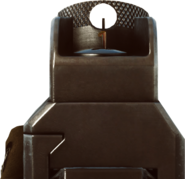 M416 held by an USMC Assault.
Add a photo to this gallery

http://symthic.com/bf-hardline-weapon-info?w=M416 Retrieved Mar. 20th
"The M416 is an AR-15-style rifle that sports a short-stoke gas system similar to the G36. This makes the M416's rate of fire slightly higher than traditional blow-back operation."

The M416 is a weapon featured in Battlefield Hardline as a purchasable assault rifle available to the Criminal Operator kit.

It has the second highest rate of fire in its weapon class at 850 RPM. By default, the M416 is equipped with the Comp M4S.

M416
Add a photo to this gallery 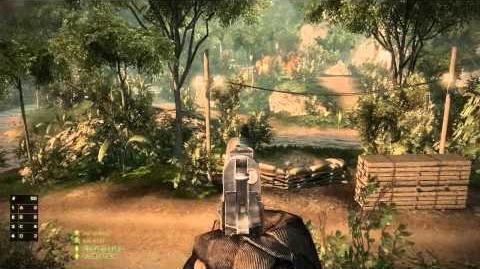 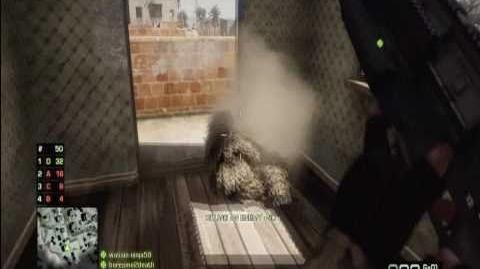 M416
Gameplay with the M416 in Battlefield: Bad Company 2 at Arica Harbor in Squad Deathmatch mode 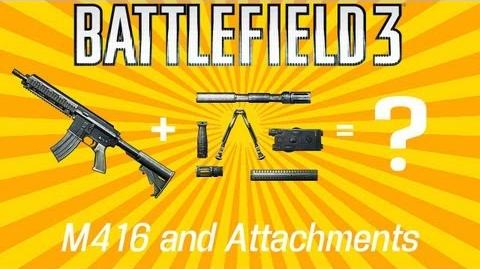 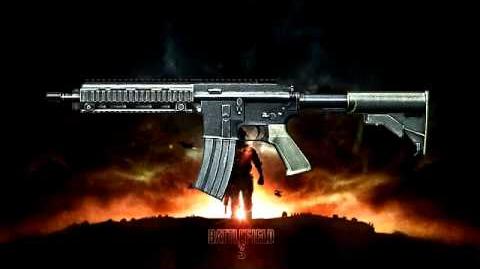 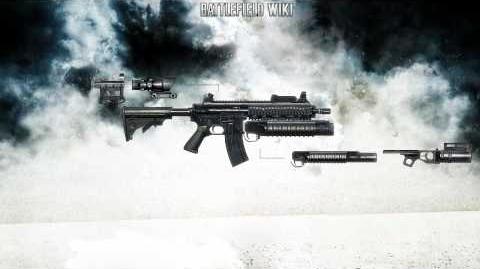 Retrieved from "https://battlefield.fandom.com/wiki/M416?oldid=362937"
Community content is available under CC-BY-SA unless otherwise noted.