Battlefield Wiki
Register
Don't have an account?
Sign In
Advertisement
in: Standard, Battlefield V: War In The Pacific, Vehicles of Battlefield Vietnam,
and 6 more
English

The M4 "Sherman" was an American-made, mass-produced medium tank. It proved effective during the Second World War, seeing extensive use in the Pacific and European theaters.

The Sherman is a vehicle featured in Battlefield 1942 as the United States Army's, United States Marine Corps', British Army's and Canadian Army's standard medium tank. It spawns regularly at certain flags controlled by any of the aforementioned factions. It is equal to other medium tanks in speed, maneuverability and size, but holds a superiority in frontal hull and turret armor compared to the IJN's Type 97 Chi-Ha, and slightly rear-turret and rear-hull armor compared to the Wehrmacht's Panzer IV. It is equal in firepower and has more accuracy, to other medium tanks.

The Battlefield 1942: Secret Weapons of WWII expansion features the Sherman with T34 Calliope multiple rocket launcher mounted on it.

A render of the M4 Sherman with the T34 Calliope.

The Sherman is featured in the World War II mod for Battlefield Vietnam . It is the standard tank of the USMC forces. It is statistically identical to the Chi-Ha, and remains almost unchanged from its Battlefield 1942 version.

Driver
1 Passenger
The Royal Tank is a vehicle featured in Battlefield Heroes for the Royal Army and is the counterpart to the National Tank. The tanks main gun can cause heavy damage to any vehicle, and can seriously injure any dismounted infantryman. 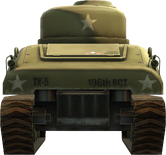 A rear view of a Royal Tank

The Sherman is a vehicle featured in Battlefield 1943. It spawns regularly at certain USMC controlled flags. It has a coaxial machine gun for the driver's anti-infantry needs and a main cannon for heavier targets such as other tanks or static defenses. The projectile of the main cannon has a noticeable arc in its trajectory, limiting its long range capabilities. Another soldier can make use of a turret-mounted M1919 Browning, providing some extra anti-infantry power.

The Sherman (along with the Chi-Ha) is able to knock down trees simply by driving into them. It is the direct equivalent to the IJN Type 97 Chi-Ha. Players can ride on the back by jumping onto it from an elevated position. This is very glitchy and complicated, but can be effective.

The Sherman is a vehicle featured in the singleplayer and multiplayer of Battlefield V. It first appeared in the Battlefield V - Official Single Player Trailer, but was not on the list of confirmed vehicles available at launch.[1]

The Sherman appears as both an active vehicle during My Country Calling in the 1941 and 1944 parts, with the 1941 being enemy units and 1944 supporting British troops. wrecked sherman tanks appear in Tirailleur.

The Sherman is seen in extensively in The Last Tiger as the primary opponents; engaging the player alongside Staghound T17E1s.

There are three variants of the Sherman seen in the campaign:

Sherman 76mm in My Country Calling 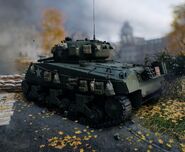 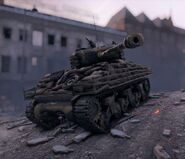 A unique M4A3(76)W Sherman seen from campaign, telling Stefan's crew to surrender. This unique tank, in this case, is heavily fortified not only with sandbags but also with tracks wrapping its every side of turret. There is a huge speaker on its turret sending out propaganda.

None
·HE Smoke Shell (Upgrade)
·HEAT-T round (Upgrade)
"Originally designed to support infantry the M4 medium tank found itself pitted against all manner of armored vehicles. Sporting a 75mm cannon it was renowned for its reliability."

The Sherman is available to the USA faction. It was introduced in the fifth Tides of War chapter War in the Pacific. In the Pacific theatre, it is the equivalent of the Japan's Type 97 tank; in Europe and North Africa, its German counterpart is the Panzer IV.

The tank can seat three players. In its default configuration, the driver has access to a 75mm tank gun and coaxial M1919 MG, while the gunners each control a machine gun from within the front right of the hull and on a pintle mount atop the turret, respectively. In comparison to the standard Type 97, the Sherman is more powerfully armed - its 75mm gun has better performance against both infantry and armor than the Type 97's 57mm, thanks to its superior blast radius and near 50% increase in impact damage, but is marginally slower to reload.[2] This improved firepower comes at the cost of reduced mobility and poor concealment ability. Both the hull and turret on the Sherman are considerably larger than the Type 97, increasing the chance of being hit. Furthermore, its tall profile results in top-heavy instability, which can cause the vehicle to tip over when driving across sloped terrain.

The Sherman's expansive six-tier Specializations tree features a myriad of upgrades for the tank's offensive and defensive capabilities, which helps the vehicle compete in the European theatre against the greater variety of German tanks. The 75mm gun can be replaced at Rank 3 with either a 105mm Howitzer for increased area of effect, or a 76mm gun for greater tank-killing capacity. The coaxial MG can be replaced with a Flamethrower, which has a short range but can be a powerful anti-infantry deterrent. Special shell types also become available at Rank 3 and Rank 6. HE Smoke Shells have reduced explosive effect, but emit a large cloud of smoke upon detonation. Such shells can be useful in screening the tank from distant enemies, supporting infantry pushes, or for defensive use in addition to the tank's preexisting smokescreen launcher. Alternatively, HEAT-T shells, dual-purpose munitions with improved damage and blast effect, can aid in defeating both infantry and armor. Much of the tank's other upgrades are focused on increasing survivability, with options to bolster the Sherman's track, turret and engine.

Front of the Sherman

The Sherman as seen in the Battlefield V – War in the Pacific Official Trailer. It is equipped with the Coax Flamethrower specialisation.

The Sherman is a vehicle featured in Battlefield 2042. Available exclusively in the Battlefield Portal, it functions in a similar manner to previous installments.