Two variants of the RO933 appear in Battlefield Hardline: the Operator exclusive RO933 Carbine and the all class RO933 .300 BLK Assault Rifle.

The semi-automatic RO933 M1 Sniper Rifle is also available for the Professional kit.

Symthic
"With its rifle-caliber and 11.5" barrel, the RO933 bridges the gap between SMG and assault rifle. This weapon is great in close quarters, but is capable out to medium range."

The RO933 is a carbine featured in Battlefield Hardline, and is the first primary weapon available for use to the Operator kit for both factions. It has a higher rate of fire than the M16A3, at 850 RPM, and is an effective weapon at close and medium ranges, but has considerable drop-off at long range.

The RO933, by default, is equipped with a Micro T1, Stubby Grip, and Flash Hider. 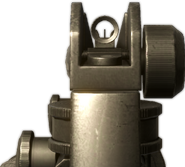 Flicking out the magazine during an empty reload

The RO933 as it appears on the loadout screen.

The RO933 with an ACOG as seen in the Rescue trailer

It is an integrally suppressed version of the RO933, meaning that it has a permanently attached Suppressor in its Barrel customization slot. As well, it fires the heavier .300 Blackout round as opposed to the normal RO933's 5.56 NATO, and is categorized as an assault rifle instead of a carbine.

The .300 BLK is a heavier version of the RO933, doing more damage and having greater range, but with heavier recoil and a slower rate of fire. Due to its suppressor being permanently attached, players will have to use under barrel grips to help compensate for the .300 BLK's heavy recoil as a Muzzle Brake or Compensator cannot be utilized. Unlike the normal carbine, Extended Magazines cannot be used on the .300 BLK. 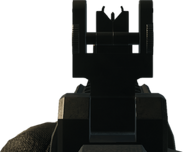