The M60 is an American Medium Machine Gun designed between the late 1940s to 1957, where it was first put into service with the United States military to replace the M1918 BAR and M1919 Browning.

Its design is largely based upon several Axis-used weapons, specifically the FG42—to whom the M60's early prototypes bore a significant resemblance to, and with which the modern weapon still shares the stock design—and to a lesser extent, the MG42.

The M60 is a weapon featured in Battlefield Vietnam, issued to American and South Vietnamese for the Heavy Assault kit.

It has a 100-round capacity, high standing or crouching recoil, medium damage, high rate of fire and low accuracy. Prone decreases most of the drawbacks of this weapon, especially its recoil. It is the counterpart to the North Vietnamese RPD.

The Stationary M60 is an emplaced weapon found mounted in bunkers, huts, towers, and crashed CH-47s on the Defense of Con Thien and the Fall of Saigon.

These M60s have unlimited ammunition and otherwise have the same characteristics of the M60s mounted in vehicles. They tend to be near American and South Vietnamese bases, though some are scattered about.

The M60 is also mounted on several American and South Vietnamese vehicles, these being the PBR, the Huey and the ACH-47. It still has the same kind of performance damage- and accuracy-wise, though it has an overheat limit, a 400- to 500-round belt that never needs to be reloaded, and, since being mounted, has no recoil.

The M60 in Battlefield Vietnam

Another image of the M60 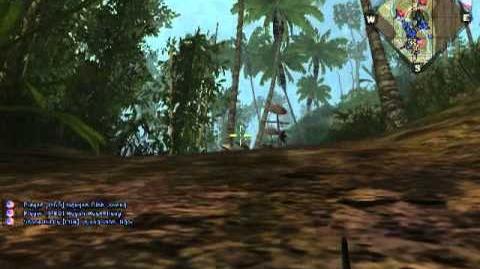 BFV M60 footage
Gameplay with the M60 in Battlefield: Vietnam, on the map Ho Chi Minh Trail; note that the player is prone, substantially decreasing recoil.
Add a photo to this gallery

"Iconic America rifle, famous for its service in the Vietnam War. Designed in the late 1940s, it borrows heavily from German WW2 machinegun designs."

The M60 is a machine gun featured in Battlefield: Bad Company as one of the "Find all Five!" weapons for the Support kit. While players originally needed to subscribe to the Battlefield Newsletter to obtain it, DICE later released a free code for the weapon, try4ndrunf0rcov3r.

The M60 has 150 rounds in a full belt with 300 rounds in reserve. It has a slower rate of fire than other LMGs, which will give it a disadvantage at closer ranges, but this is made up for by its high accuracy and damage.

The M60 in Battlefield: Bad Company on the multiplayer map End of the Line

The M60's iron sights
Add a photo to this gallery

[1]
"Utilizing design elements from the WWII MG42, the M60 was introduced in 1957 and has been the workhorse of every branch of the US Military. It has gone through several modifications but is slowly being phased out by the M240."

The M60 LMG is a weapon featured in Battlefield: Bad Company 2.

The M60 is always used by Terrence Sweetwater, and can be found in its normal state on Sangre Del Toro, in the fountain when the two Hinds drop in troops at station B.

A variant with a 4X Rifle Scope can be found to the south of the bottom of the lighthouse in Sangre Del Toro, and by a destroyed wall on the last slope before the player faces the two Havocs at station C. Both variants of the M60 are collectibles.

The M60 is the 4th light machine gun issued to the Medic kit requiring 25,000 points. It has a belt length of 100 rounds and has the highest damage per shot of the LMGs, equal to that of the PKM after multiple patches.

As with the other light machineguns (and the G3), the M60's recoil decreases with each successive shot, making recoil easier to control allowing for better accuracy but not effecting the weapons natural spread and deviation.

The M60 with a Red Dot Sight at Port Valdez 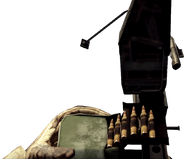 One frame from the reload sequence.
Add a photo to this gallery

[1]
"Utilizing design elements from the WWII MG42, the M60 was introduced in 1957 and has been the workhorse of every branch of the US Military. It has gone through several modifications but is slowly being phased out by the M240."

The M60 is a weapon featured in the Battlefield: Bad Company 2: Vietnam expansion for the Medic kit.

Its appearance, like all other Vietnam weapons, is more battle-worn than that of the base game's. It has stats similar to its base game counterpart, except in terms of damage, but the iron sights are cleaner and less obstructive, most likely to balance out the lack of attached sights available to the player.

The M60 is also mounted on UH-1 Iroquois helicopters for use by passengers. The only difference between the M60 on the UH-1 and the Medic's M60 (other than ammo count and overheating) are the rear aperture sights, the UH-1's having a circle (although it is unusable) and the Medic's having a vertical rectangle.

Among its rusted and battered appearance, the M60 also boasts woodland camouflage and is one of only two weapons in Battlefield: Bad Company 2: Vietnam to use camouflage, the other being the M79.

US Medic firing an M60 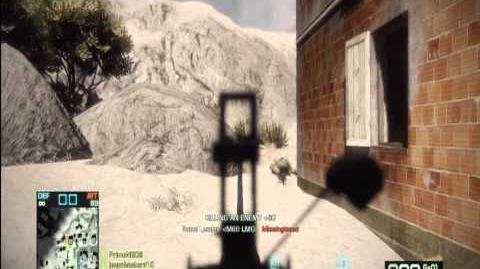 M60 LMG
Gameplay of the M60 LMG in Battlefield: Bad Company 2 at Atacama Desert, Arica Harbor and White Pass in Rush mode (note: this footage was taken before the R9 Client update, thus the M60 in this footage has damage of 20-16.7) 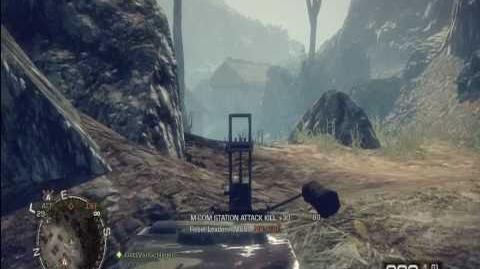 M60 Vietnam
Gameplay with the M60 in Battlefield: Bad Company 2: Vietnam at Vantage Point, Cao Son Temple and Operation Hastings in Rush mode
Add a photo to this gallery

Battlefield Play4Free game files
"Utilizing design elements from the WW II MG42, M60 was introduced in 1957 and has been the workhorse of every branch of the U.S. military. It has gone through several modifications throughout its service life but is slowly being phased out by the M240."

The M60 is a weapon featured in Battlefield Play4Free, issued to the Medic kit. It has a slow rate of fire, considerably high damage, moderate recoil and moderate accuracy. It boasts an 80-round belt with 80 rounds in reserve. Compared to its closest counterpart, the PKM, the M60 has a higher damage but is slightly less accurate.

The M60 in Battlefield Play4Free.

Elite Paint
Add a photo to this gallery

http://symthic.com/?s=bf3 Retrieved Sept. 24th
http://www.ign.com/wikis/battlefield-3/M60E4
"“The Pig,” as it was commonly referred to when it was introduced in Vietnam, has served with every branch of the US Military and continues to serve with Special Forces groups. Although the M60 has been mostly replaced by the M240, the upgraded M60E4 features modern accessory rails, a shortened barrel, and improved reliability, and reduced weight. The M60E4 features a bipod standard for supported shooting. "

The M60E4 is a weapon featured in Battlefield 3.

The M60E4 can be found in the mission Kaffarov on the dead bodies of Kaffarov's security guards. Its low rate of fire makes it useful against the NPCs at longer ranges, but the recoil of the weapon makes aiming difficult.

The M60E4 is the next-to-last unlock in the Support class, requiring 130,000 points to unlock. The M60 has the lowest rate of fire of all the Machine Guns and a moderate recoil profile; its damage is identical to the 7.62mm machineguns, the PKP Pecheneg and M240, yet its traits make it a kind of middle-ground between the other 7.62mm machineguns and the 5.45mm/5.56mm light machineguns—higher damage yield than the light machineguns, yet lower kick than the heavier machineguns.

0.098
10.8
"“The Pig,” as it was commonly referred to when it was introduced in Vietnam, has served with every branch of the US Military and continues to serve with Special Forces groups. Although the M60 has been mostly replaced by the M240, the upgraded M60E4 features modern accessory rails, a shortened barrel, and improved reliability, and reduced weight. The M60E4 features a bipod standard for supported shooting."

The M60E4 is a weapon featured in the Battlefield 4: Second Assault expansion for the Support kit. It is unlocked upon completion of the Dust Devil assignment.

Amongst the LMGs, the M60E4 is tied for highest maximum and minimum damage with the PKP Pecheneg, although it suffers from a high amount of per-shot recoil, which along with its long reload time - one of the longest of all small arms in game. A muzzle brake or a compensator can help with the former. Despite its damage characteristics however, its moderate rate of fire frequently allows it to be outdamaged in close quarters, while at longer ranges use of a Bipod is required, as accuracy at distance is hampered by heavy recoil. The iron sights are far more obtrusive then previous games, encouraging the use of optics. A Suppressor can assist in close quarters engagements, as the low damage drop off of the weapon is not impacted as much by its use.

150
The M60-ULT (M60 Ultimate) is a special Battle Pickup version of the M60E4 that appears on Operation Outbreak in a crashed UH-1Y Venom near the Ghost Town in Conquest and Obliteration. This version of M60 has a 150-round magazine with no ammo in reserve, fires explosive rounds, and can only be fired from the hip. Aesthetically, the M60-ULT has two small shields mounted on either side of the foreguard and the Bad Company "Smiley" grenade is on both shields and the ammo pouch.

While the M60-ULT is unable to use its sights, it has very tight hipfire, much more so than the normal M60E4. With its high damage and good accuracy, the weapon can perform well in close and medium ranges. Its explosive rounds also allow it to work well against groups of enemies and makes it very effective at suppressing enemies. It posses a large magazine size of 150 rounds, but the player receives no extra magazines unless the AMMO specializaton is active. Like all Battle Pickups, the M60-ULT cannot be resupplied. The weapon is also capable of damaging any vehicle that the 50. Cal is able to, allowing it attack jeeps and Transport Helicopters.[2] The M60-ULT primarily struggles at long ranges, as its inability to aim and damage drop off makes it difficult to use effectively in these engagements.

The M60-ULT mounted on the crashed Venom

M60-ULT in first person
Add a photo to this gallery

Retrieved from "https://battlefield.fandom.com/wiki/M60?oldid=363047"
Community content is available under CC-BY-SA unless otherwise noted.