The Beretta 92F/FS (designated M9 in the United States Military) is the US Army's and Marines' standard sidearm featured in many installments of the Battlefield series. Bearing the designation M9, the pistol and its 9x19mm cartridge quickly became the standard for all US forces. It replaced the dated M1911 as the standard-issue sidearm in US Handgun Trials during the 1980s.

Game files
"The 92FS is a 9mm semi-automatic pistol which carries 15 rounds in the magazine. The 92FS is used by military and law enforcement all over the world. "

The 92FS is the USMC's and European Union's standard sidearm in Battlefield 2. Its stopping power and accuracy are identical to that of other handguns in the game. Its magazine capacity is 15 rounds, its spread values are average, and its rate of fire is three-hundred rounds per minute -- identical to that of the MEC's MR-444 and Chinese QSZ-92. There is also a suppressed version issued to the Special Forces kit and Sniper kit, but the only functional difference is that the suppressed variant will not reload without player input.

The 92FS in Battlefield 2

The silenced 92FS in Battlefield 2.

Iron sight
Add a photo to this gallery

The M92F is the standard sidearm issued to all USMC kits in Battlefield 2: Modern Combat. It has decent firepower, poor accuracy, but a moderate rate of fire. USMC Sniper and Special Ops kits use suppressed variants of the pistol.

The M9 is a weapon featured in Battlefield: Bad Company

The M9 is the standard pistol issued to the United States Army Recon kit. The M9 carries 12-rounds per magazine and the player will have 48 rounds in reserve. It takes six body shots to kill a player at full health.

The M9 in Battlefield: Bad Company on the multiplayer map Deconstruction

The M9's iron sights
Add a photo to this gallery

[1]
"9mm semi-automatic pistol which has served as the primary pistol of the US Military. Equipped with a 15 round staggered magazine with reversible release. An optimal level of mobility accounts for considerable lack of power."

The M9 Pistol is a weapon featured in Battlefield: Bad Company 2. It is the first sidearm issued to the player and features a 12-round magazine, and modest close-range accuracy. It can kill with four-six shots. It has very low recoil and open iron sights can make it effective in medium range engagements as well.

The M9 at Panama Canal in multiplayer.

The iron sights of the M9. 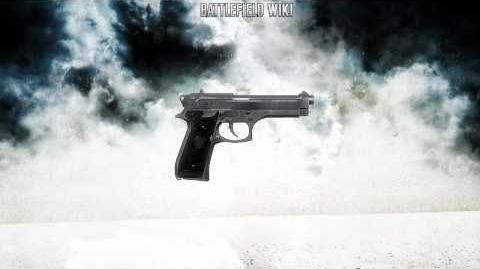 Battlefield Play4Free game files
"9mm semi-automatic pistol which has served as the primary pistol in the US Military. Equipped with a 15 round staggered magazine with reversible release. An optimal level of mobility accounts for considerable lack of power. Capable of being modified to support lights and other tools."

The M9 is the standard handgun issued to all players in Battlefield Play4Free and is unlocked by default. It has a 15-round-magazine, plus three magazines in reserve, a low rate of fire, and low recoil.

Players who have bought 2800 or more Battlefunds during December 2010 received the "Only the Few" M9. This gun differs from the standard M9 through small aesthetic changes as well as a rate of fire and magazine increase of 600 and 15 respectively.

The M9 in Battlefield Play4Free

The Only the Few M9

Visual view about the M9's close to medium range situation

The M9 is a weapon featured in Battlefield 3.

The M9 is first seen in the first mission of the singleplayer campaign, Semper Fidelis. Blackburn obtains it by kicking a PLR operative armed with the weapon. For tutorial purposes, the M9 can eventually kill an enemy with a single shot in the mission. It is also used in The Great Destroyer, being identical in stopping power to the first level.

In Co-op the M9 is the starting secondary weapon for both players in Exfiltration, Hit and Run, and Drop 'Em Like Liquid with suppressors attached. Also, both players can use the M9, unsilenced or silenced, in the man-down state in every mission. It can kill an enemy in two to three hits.

The M9 is issued to the United States Marine Corps as their standard sidearm. It has a 15-round magazine and a quick reload time, with a moderate rate of fire. Although it is versatile enough for mid-range use, the M9 is most effective at close range, and is incredibly useful to any player, especially Recon players who are encountered by opposing players at close range. There are three variants of the M9 pistol - first, the standard no-attachment M9, the M9 TACT. sporting a Tactical flashlight underneath the barrel, and the M9 SUPP. which has a Suppressor attached.

The M9 in the singleplayer level Semper Fidelis.

Reloading the M9.
Add a photo to this gallery

The M9 appears as one of five weapons and as the secondary weapon for soldiers from both the US Marine Corps and the Russian Spetsnaz in Battlefield 3: Aftershock. The gun holds 12 rounds per magazine and the total amount of ammunition the player has for the M9 is 60 rounds.

The M9 returns in Battlefield 4, as the first sidearm unlocked in the game after the default P226. As with the other 9mm handguns, the M9 possesses medium damage and moderate recoil. Like most of the 9mm handguns, it has a relatively small magazine at 15 rounds (plus one in the chamber). Statistically, it is similar to the P226, but its recoil pattern tends to be a more stable grouping in the upward direction, while the P226 tends to pull left.

0.45
0.3 ┴ 0.3
"A common sidearm in military and law enforcement for many years, the 92FS is a double-action/single action semi-automatic pistol. This pistol is highly accurate."

The 92FS a pistol featured in Battlefield Hardline. It is the first handgun that is available for use for the Operator kit for both factions. By default, the 92FS is equipped with Improved Iron Sights.

It is a average handgun with no unique traits, but is well balanced. It has high damage and close range, killing an enemy in as little as three shots, but its damage quickly drops off, requiring seven hits at range. Its recoil is low and it can be fired fairly quickly without muzzle climb hindering the player. Overall, it can be used effectively as a close-range backup weapon, but any other unlockable pistol for the Operator class will present an advantage over it.

The 92FS being held in first-person.

The 92FS being reloaded.
Add a photo to this gallery

Retrieved from "https://battlefield.fandom.com/wiki/M9?oldid=371058"
Community content is available under CC-BY-SA unless otherwise noted.