Not to be confused with the Gewehr M.95

The M95 is a bullpup, bolt-action, anti-materiel sniper rifle chambered for .50 BMG (12.7x99 mm), designed by Barrett Firearms Manufacturing in 1995.

[1]
"The M-95 Barret is the most massive weapon to date. It fires 12.7mm (.50) ammunition and is one of the few handheld weapons that is known to penetrate armored glass such as used in helicopter cockpits."

Its main improvement is a more powerful cartridge, the .50 BMG. The M95 is the only small arms able to deal 95% damage when fired on any part of the enemy (save for the lethal headshots) and to penetrate reinforced glass.

Snipers on fairly close/narrow maps such as 32/64-sized Gulf of Oman and Wake Island 2007 like to use it because of its high penetration capabilities, as it is the only weapon capable of penetrating Helicopter and Jet Cockpit glass. Also, a few snipers use the M95 for long-range shooting, despite of its high bullet-drop and scope with relatively thick crosshairs.

The M95 in Battlefield 2

The M95 is a weapon featured in Battlefield 2: Modern Combat as the standard sniper rifle issued to the USMC Sniper kit. It has very high firepower and good accuracy, but a slow rate of fire due to being a bolt-action sniper rifle.

A USMC Sniper holding the M95.
Add a photo to this gallery

Battlefield: Bad Company Official Prima Guide
"A bolt action version of the M82A1 weapon, with shorter total length thanks to the bullpup configuration. The large caliber ammunition makes it a preferred sniper rifle for long range sniping as well as anti-material tasks. "

The M95 is a weapon featured in Battlefield: Bad Company.

The M95 can be found on Crash and Grab as a collectible, accompanied by an M9. It can be found in the large communications station at the base of the mountains. However, it is possible to acquire the weapon (and the M9) in Crossing Over by picking it up from a dead Legionnaire Sniper.

The M95 is an unlockable for the Recon kit. Despite being the most powerful sniper rifle in-game, it will not kill with one shot unless the enemy has taken some damage, is shot in the head or is at close range. It can also damage light vehicles and helicopters by a considerable amount due to its .50 caliber anti-materiel round.

The M95 in Battlefield: Bad Company on the multiplayer map Valley Run

A glitch while aiming the M95.
Add a photo to this gallery

The M95 is a weapon featured in Battlefield Heroes and is available to be purchased for any Royal Commando. It was first released with the event "Battlefield Heroes Gets Bad Company" event. It was originally only purchasable for players over level 10, but that restriction was removed in December 2010 along with all other restricted weapons.

BFH m95.png
The model of the M95 in Battlefield Heroes.
Add a photo to this gallery

The M95 is a sniper rifle that is featured in Battlefield Online.

The M95 Sniper is a weapon featured in Battlefield: Bad Company 2.

The M95 can be found during Crack the Sky, on top of a watch outpost overlooking the communications building, and with a 4X Rifle Scope during No One Gets Left Behind, being used by a sniper in a watchtower during B-Company's assault on a Militia prison camp.

The M95 Sniper is the 7th and last sniper rifle issued to the Recon kit, requiring 34,000 points to unlock. It has the slowest rate of fire for all sniper rifles, but has incredible penetration due to the .50 Caliber anti-materiel round.

Due to the anti-materiel round, it can destroy a UAV-1 with one shot to any part. Despite its damage statistics, the M95 can only kill in one shot with a headshot, at close range, or if the enemy is already damaged.

Otherwise, it takes two shots. The M95 also has the greatest one shot kill range. It is worth noticing that, for every meter after the 19 meter mark, the damage of the weapon drops by 2.5 per meter, making closing with targets a viable tactic.

However, due to its slow aiming speed, keeping a fair distance, as well as a loaded pistol as backup, is recommended. Using magnum ammunition is a common tactic among Recon players, but this only allows the M95 to kill in one shot at slightly longer ranges.

Attaching a Red Dot Sight or 4X Rifle Scope to the weapon will not cause the bullet drop to disappear; however, the scopes help magnify the bullet drop as well as the target.

It can damage all vehicles except tanks (both light and heavy); it does 7-18% damage to helicopters and about 10% damage to light vehicles without using Magnum Ammunition. It is devastating against Personal Watercraft and Quad Bikes, providing the fast-moving vehicles can be hit.

"The unique camouflaged SPECACT personal M95 SNIPER gives you a visual edge on the Battlefield, showing that you're a force to be reckoned with."

The M95 SA is also available to those who purchased the SPECACT DLC. It can be bought on Xbox live for 160MS points or through the Dr. Pepper/EA promotion, and for $1.99 at the PlayStation Store.

This also comes with a differently textured outfit. The change is purely cosmetic. The SA Variant, unlike all other SA weapons, has one single finish to it due to the standard edition of the weapon being camouflaged. It instead has a matte black finish on all maps/environments, like many other weapons in the game.

The M95 at Arica Harbor in Conquest.

The M95 SA at Arica Harbor in Conquest. 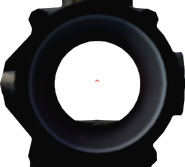 The M95 SA aim through the 4X Rifle Scope. 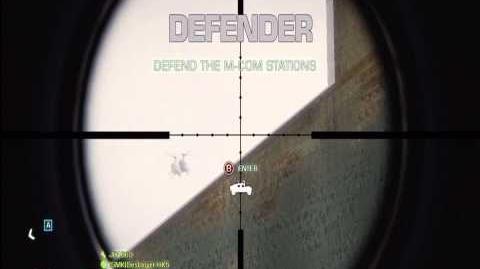 M95 Sniper
Gameplay of the M95 in Battlefield: Bad Company 2 at Panama Canal and Arica Harbor in Hardcore Rush mode.
Add a photo to this gallery

The furthest an enemy can be for the M95 to do its highest damage at 18m.

The closest that an enemy can be for the M95 to do its lowest damage at 36m.
Add a photo to this gallery

The M95 is a purchasable sniper rifle that is featured in Battlefield Play4Free. It has the most damage for a sniper rifle on par with the M82A3. This benefit is offset by its slow bolt cycle, reload time, lower magazine capacity, and high recoil. It also is expensive at 979

for unlimited use after unlock.

The weapon has great potential as a sniper as it works well at medium to very long ranges and can usually kill in two shots, or a single head-shot. The weapon's bullet drop over range is also lower than other snipers, but the vapor trail is larger as the bullet it fires is also considerably larger.

The .50 BMG cartridge can penetrate all vehicles' armor except for main battle tanks. The weapon itself features a tan paint scheme on its upper frame and magazine well, similarly to the other Elite weapons.

The Stats and Description of the M95 in Play4Free

The M95 at Karkand in Battlefield Play4Free.

Detailed render of the M95 in Play4Free 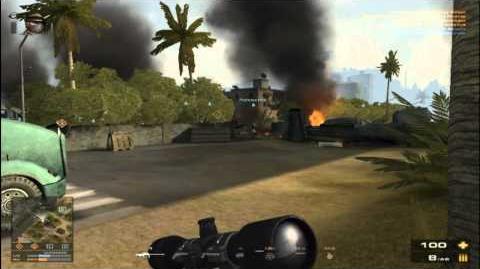 The Enhanced Scope M95 is a separate version of the original M95 and features a variable zoom scope with two different magnification levels. While having exactly the same stats as the original M95, the Enhanced Scope M95 has a second increased zoom that can be used by the player scrolling the mouse wheel forward when viewing through the scope. Players can also return to the default zoom by scrolling the mouse wheel backward.

The increased zoom magnifies distant targets to make them more visible to the player. However, the player will need to still account for bullet drop, even more so with the increased magnification. The Enhanced Scope M95 costs 150

Retrieved from "https://battlefield.fandom.com/wiki/M95?oldid=357248"
Community content is available under CC-BY-SA unless otherwise noted.