Not to be confused with the M10 Wolverine
The MAC-10 (Military Armament Corporation Model 10) is a highly compact, blowback operated machine pistol developed by Gordon B. Ingram in 1964. It was used by the United States military in the Vietnam War by special forces.

The M-10 fires either .45 ACP or 9x19mm Parabellum cartridges from a 30-32 round magazine placed in the pistol grip at a rate of fire of around 1100 rounds per minute with an effective range of 50-80m.

[1]
"An American made machine pistol with a telescopic bolt that wraps around the barrel, allowing for a very compact design. Used by special forces units during the Vietnam War."

In Battlefield: Bad Company 2: Vietnam, the M10 is issued to the Engineer kit. It has a 40-round magazine. Its rate of fire is identical to that of the UZI, which can put the M10 at a disadvantage since it has lower damage than the UZI, but this balanced by the M10's higher accuracy and lower recoil. 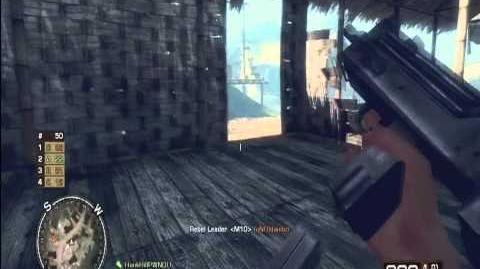 MAC 10
Gameplay with the M10 in Battlefield: Bad Company 2: Vietnam at Operation Hastings in Conquest, and Vantage Point in Squad Deathmatch

The MAC-10 is a weapon featured in Battlefield Hardline, categorized as a machine-pistol.

The MAC-10 is carried by some criminals throughout the campaign, and is first seen in Checking Out. It is in the player's sidearm slot, rather than a Submachine gun. It is also carried by Leo Ray.

The MAC-10 has the highest damage and the highest rate of fire out of all of the machine-pistols at 1145 RPM, firing almost as fast as the K10. However, the MAC-10 suffers from very heavy recoil, a small damage drop-off range, and the smallest initial magazine size in its class (conversely, it also has the highest magazine size in its class when equipped with Extended Magazines). This limits the weapon to close quarters much more so than the other machine-pistols, as it will be very inaccurate at longer ranges and its damage at range will be very limited. 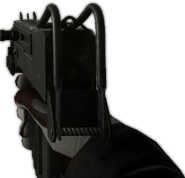 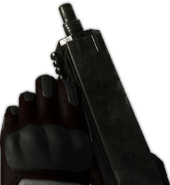 The criminal on the left wields a MAC-10.

Beta weapon image, with a Heavy Barrel, Stubby Grip, and glitched Stock attached. The MAC-10 cannot equip foregrips in the game itself.