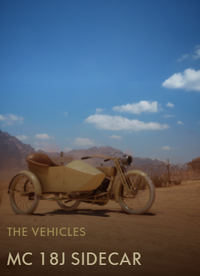 Armed sidecars were used to support units of motorcycle-mounted infantry. However it was rarely fired from a moving vehicle in action. Firing from a static position was considered most effective firing discipline.

Retrieved from "https://battlefield.fandom.com/wiki/MC_18J_Sidecar_(Codex_Entry)?oldid=343293"
Community content is available under CC-BY-SA unless otherwise noted.