The Desert Tech MDR (Micro Dynamic Rifle) is a modular American bullpup rifle currently under development and set for production in 2016. The MDR is an ambidextrous rifle intended for military and Law Enforcement use, and features a unique forward ejection system for spent shell casings. The MDR has two configurations, the standard variant and a CQC compact variant (MDR-C).

The MDC is an Assault rifle introduced in Battlefield Hardline: Robbery for the Law Enforcement Operator.

The MDC fires the heavy 7.62×39mm round, giving it high damage but heavy recoil as well.[1] 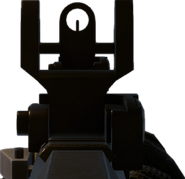 Retrieved from "https://battlefield.fandom.com/wiki/MDC?oldid=362923"
Community content is available under CC-BY-SA unless otherwise noted.