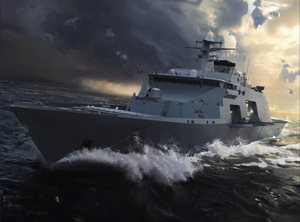 The MFS-04 Exodus is a fictional Arleigh Burke-class destroyer featured in the Journey of the No-Pats blog and the Battlefield 2042 - Exodus Short Film.[1]

Although described as an Arleigh Burke-class (over 50 years old by the time of Battlefield 2042), its design appears to borrow slightly from more modern ships. Its helicopter flight deck features a hangar door that opens to nearly full beam. It also contains a large cargo door to starboard, and a larger superstructure apparently capable of carrying air vehicles.

Described as a "Global Combat Ship, General Purpose variant"; with a length of 156.2 meters and beam of 28.6 meters, Weighing 7,400 tons (8,000 tons at full load), and with a top speed of 31 knots (57 km/h). It is seen armed with a naval gun of unknown caliber in the front of the ship alongside a Vertical Launching System (VLS); with the upper deck near the bridge sporting likely an anti-ship weapon system (Likely a Harpoon launcher), with an Anti-Aircraft missile pod and CIWS near the rear. Sporting a hangar bay, the ship has at least one EBAA Wildcat and an other unknown light vehicle and it being used for housing and medical station.

At one point, it belonged to the British Royal Navy before being commandeered by the No-Pats at an unknown period of time.

The MFS-04 Exodus is a No-Pat destroyer commanded by Captain Kimble Graves, a former US Marine. Until late 2042, it is one of the premier combat ships of Oz's task force. It was used to liberate a colony of No-Pats stranded in Queen Maud Land, Antarctica, forced to swear allegiance to Russia in exchange for fuel produced at its illicit oil facilities. Given the Exodus' lack of armament and the captain's nature, it is surmised that the ship serves a more humanitarian role.

Various activities in the hangar bay of the Exodus

Encountering a trio of MV-38 Condors in foul weather

Concept art + statistics on the Exodus