The MG15 n.A is a Codex Entry featured in Battlefield 1. It is unlocked upon obtaining ten kills with the MG15 n.A.. 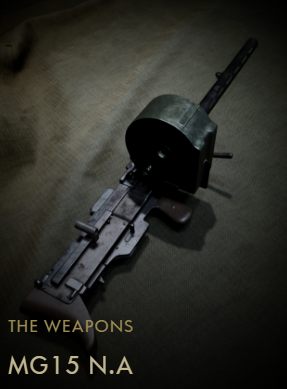 During the Battle of the Somme in 1916, the German army came up against the Lewis Gun in great numbers and realized that they lacked a similar weapon, as they only had some Madsens and the MG 08/15 had not yet been fielded. The original MG15 was a heavy, water-cooled machine gun that had not seen much use, but in early 1916 it was redisigned into the MG15 n.A (which stands for "neuer Art" - "new model").

The receiver had been lightened and a rifle-style butt stock, a pistol grip and trigger grouping were added, and a thin perforated air-cooled barrel replaced the heavy water-cooled one. It also received a carrying handle, new sights and a light tripod. The MG15 nA was fielded in 1916 and was a much lighter machine gun that the water-cooled MG 08/15 that would later become Germany's primary LMG.

The MG15 nA was closer to the Lewis Gun in role, although considered less reliable, and intended as more of a short-range LMG. It was used in great numbers during the war, also as an aircraft machine gun, but is was used primarily by the German Asia Korps of the Eastern and Palestinian fronts and special Leichtmaschinengewehr Truppen were formed around the weapon. It was, however, always in the shadow of the more famous and widely used MG 08/15, and the MG15 nA was out of service and largely forgotten by World War II.

Retrieved from "https://battlefield.fandom.com/wiki/MG15_n.A_(Codex_Entry)?oldid=343137"
Community content is available under CC-BY-SA unless otherwise noted.