The MG36 is the Light Machine Gun variant of the H&K G36 Assault Rifle. It is fitted with a 100 round Beta C-Mag magazine and a heavy barrel, and fires the standard 5.56mm NATO cartridge like the other variants of the G36 family. It has since been discontinued due to the lack of a market.

[1]
The MG36 appears in Battlefield 2 as the tier 2 unlock for the Support kit. It is also the Default weapon for the Special Air Service in the Special Forces expansion. The weapon in the game is the standard MG36, but with a G36C-style Picatinny rail instead of the scoped carrying handle. The MG36 has about the same damage and accuracy stats as the M249 SAW, but with less recoil and with more user-friendly sights. However, the sight is more appropriate for urban environments while the M249 SAW's iron sight is more appropriate for more open environments. The weapon, like the other G36 variants, have the same firing noise, as well as the same reload sounds. 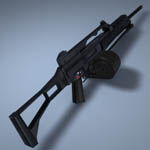 The MG36 unlock icon.
Add a photo to this gallery

In singleplayer, the MG36 can be found as a collectible on Crossing Over and picked up randomly from dead Legionnaire Mercenaries.

In multiplayer, the MG36 is issued to the Medic Kit as an unlockable. It has a built-in sight that has a small red dot which allows more precise aiming, but also limits the user's view as there is no peripheral vision with this scope. It has 150 round drum magazine and 300 rounds in reserve. It has stats similar to that of the XM8 LMG, but has significantly more accuracy, and is the most accurate Medic Kit weapon. It deals moderate damage and has a fairly high rate of fire.

The MG36 in Battlefield: Bad Company's multiplayer on the map Crossing Over.

The MG36's scope
Add a photo to this gallery

[2]
"A modified G36 equipped with heavier barrel and a 100 round magazine. This LMG fills the tactical needs when a GPMG is impractical. It places added firepower into a gun team when mission objectives require fast mobility."

Only available in multiplayer, the MG36 is the 6th light machine gun issued to the Medic Kit, requiring 42000 experience points to unlock.

It makes a great LMG for the Medic kit in multiplayer, as it has a built in Reflex Sight, thus freeing up a Specialization slot. Because of this, many players use this opportunity to use a different specialization. Like in Battlefield: Bad Company, the MG36 has similar stats to that of the XM8 LMG. The 4X Rifle Scope will increase the sight's zoom. The built-in reflex sight provides no peripheral vision, and it takes time to zoom, just like a sniper scope. It is recommended to fire in 2-3 round bursts while aiming down the sight, as continued automatic fire will slowly raise the weapon, taking the sight's reticule off target. By doing this, the player can more easily take down a target from almost any range.

The MG36's in-game description and stats evaluation.
Add a photo to this gallery

The MG36 at Valparaiso in Rush.

The view through the MG36's stock scope.

An MG36 in action at Atacama Desert in the hands of a US Army Medic.

Render of the picture to the left.

Winter camo pattern.
Add a photo to this gallery

Battlefield Play4Free game files
In Battlefield Play4Free, the MG36 is a purchasable Elite light machine gun for the Medic Kit. It is a stable long range weapon with a 60-round Beta-C magazine and medium damage, but it also has more recoil than other LMG's, meaning that it will need to be fired in bursts to be more accurate down range.

Its drum magazine allows for much quicker reloading in the field, allowing users to be back in the fight sooner, rather than be plagued with a long reload time such as in the other belt-fed light machine guns. The weapon also features a clean appearance and black paint scheme on its parts, like many other LMGs after December 1st update. 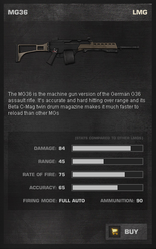 The MG36 at Sharqi in Battlefield Play4Free.

More detailed look upon the MG36 in Battlefield Play4Free

Old render of the MG36.
Add a photo to this gallery

A render of the MG36 in Battlefield Play4Free

A render of the MG36 in Battlefield Play4Free

After completing the "Keep your head down" assignment

http://symthic.com/?s=bf3Retrieved Sept. 17
http://www.ign.com/wikis/battlefield-3/MG36
"Machine gun version of the German G36. This MG model is no longer in production. It comes equipped with a bipod"

The MG36 performs in the same fashion as the M27 IAR and RPK-74 being a magazine fed LMG with the difference that the standard magazine uses 50+1 rounds. The weapon is able to fire in fully automatic, semi-automatic, and burst fire modes; with the Foregrip attached it maintains good accuracy at a distance, even during sustained fire, making it a very versatile weapon for both defensive and offensive Support activity.

The extended magazine attachment was removed on accident in the March 2012 patch, but has returned with the September 2012 patch.

It is unlocked by completing the "Keep Your Head Down" assignment which requires the player to:

Right side of the MG36

The MG36 Master Dog Tag.
Add a photo to this gallery