The MG3 (German: Maschinengewehr 3; English: Machine Gun 3) is a German general purpose machine gun designed by Rheinmetall AG in 1959. The entire weapon system is an updated version of the famous MG42 universal machine gun that was used by the German Wehrmacht during World War II, sporting differences such as being chambered in 7.62x51mm NATO. Like its predecessor, it keeps its iconic rate of fire, ranging around 1200 rounds per minute.

The MG3A1 is a coaxial machine gun mounted alongside the main gun in both the Challenger 2 and the Leopard 2A6.

Mid-Long
"An upgrade version of the classic WW2 German MG42. The MG3 is capable of a very high rate of fire and despite its age, this versatile and powerful machinegun is still in active service in many armies. "

In Battlefield: Bad Company's singleplayer campaign, the MG3 can be found as a collectible in the mission Par for the Course. It is also found with Legionnaires and MEC troops later on in the game.

In multiplayer, the MG3 is issued to the Support class. It can only be unlocked once a player reaches level 25 or if one has purchased the Gold Edition of the game, it will be unlocked as soon as one begins playing multiplayer. It has a high 200 round capacity with 400 rounds in reserve. One of it's main features is the extremely high rate of fire of 1,000 rounds per minute, making it the fastest firing weapon in the game over the F2000 and tied with the PP2000. It can kill in around 10-15 hits, but it has poor accuracy, making long-range targets difficult to kill. Burst-firing is advised if one plans to engage long range targets.

The MG3 in Battlefield: Bad Company in the multiplayer map Harvest Day

The MG3's iron sights
Add a photo to this gallery

Low
"A modern version of the WWII MG42, the MG3 serves over 20 countries because of its simple design and excellent performance. With 1000 rounds per minute, the MG3 is an incredible force multiplier. It's a testament to the original design that after 70 years it still proves strong."

In Battlefield: Bad Company 2's singleplayer campaign, the MG3 with a Red Dot Sight can be found occasionally on fallen enemies, most notably on Airborne on the second level of the plane and in the fort of Sangre Del Toro. The standard version can be found on Heart of Darkness, in the house by the first boat the player enters, on Heavy Metal, on top of a crate right before the first firefight on foot, and on High Value Target, on a crate right before entering the sewers.

In multiplayer, the MG3 is the 7th and last light machine gun issued to the Medic kit requiring 57,000 points. It holds 100 rounds and fires at 1,000 rounds per minute (the highest infantry weapon rate of fire in-game, tied with the PP-2000 Avtomat). The MG3 can be a very capable weapon, though the combination of high recoil and low damage can make it difficult to use, though it's high rate of fire and large capacity compensate for it's weak points, making it most effective in close quarters. However, as with other light machine guns, the weapon's spread is very large and can increase quickly, making it mostly inaccurate with hip-fire, especially when put into perspective with comparable assault rifles or submachine guns. Players can use Marksman Training to reduce the effects of spread. Due to its low damage, Magnum Ammunition has the small effect of lowering needed body shots by two hits, making it need a minimum of eight shots instead of ten. Using the MG3 while immobile and crouched proves most effective, minimizing recoil and deviation. For longer range shooting, it is advisable to fire in controlled bursts, to compensate for the weapon's recoil. Although the MG3 still cannot be used reliably for such things as tactical long-range headshots, its on-target accuracy in 6+ round bursts is nearly unmatched.

The MG3 can mount a Red Dot Sight or a 4X Rifle Scope, which may not be necessary as the iron sights aren't very obtrusive. The Red Dot can greatly help in pin-point shooting, especially for longer ranges. The 4X Scope can be used in a similar fashion, though the increased zoom can seem to accentuate the MG3's already high recoil, making its use require burst fire for long range.

"The unique camouflaged SPECACT personal MG3 gives you a visual edge on the Battlefield, showing that you're a force to be reckoned with."

The MG3 SA is also available to those who purchased the SPECACT DLC. It customized with Woodland, Desert or Arctic camouflage depending on the environment the player is in. It is unlocked to the player regardless of previous unlocks for the kit. It can be obtained over Xbox Live for 160MS points or through the Dr. Pepper/EA promotion, along with the special uniform. It can also be obtained on the PS3 for $1.99, and comes with the special uniform as well. The SPECACT DLC has been released as downloadable content for the PC on December 1, 2010 via the EA Store.

The MG3 in the single-player mission Heart of Darkness.

The MG3 at Laguna Presa in Conquest.

The MG3 at Arica Harbor with a Red Dot Sight in Rush.

The MG3 SA with arctic camo on Port Valdez in Rush.

The MG3 SA with desert camo at Arica Harbor in Rush.

Battlefield Play4Free game files
In Battlefield Play4Free, the MG3 is the starter gun issued to the Medic kit. It features an 80 round magazine, low damage, a high rate of fire, and high recoil. The MG3 is best suited for close range engagements, as its high recoil and low damage make it unappealing for killing enemies at longer ranges. It should be traded out as soon as possible for the PKM due to its extremely low accuracy and relatively fast ammo comsumption. 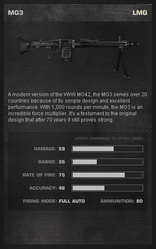 The MG3 as it appears in-game

More detailed photo of the MG3 in Play4Free

MG3 with Holo-sights
Add a photo to this gallery

An render of the MG3 in Play4Free

An render of the MG3 in Play4Free

Retrieved from "https://battlefield.fandom.com/wiki/MG3?oldid=196448"
Community content is available under CC-BY-SA unless otherwise noted.