Battlefield Wiki
Register
Don't have an account?
Sign In
Advertisement
in: Stub, Construction, Light Machine Guns of Battlefield 4,
and 2 more

The MG4 (German: Maschinengewehr 4; English: Machine Gun 4) is a belt-fed 5.56mm light machine gun designed and manufactured by Heckler & Koch. It has been selected by the German Bundeswehr to replace the MG3 general purpose machine gun at the squad support level, but complement the MG3 in many other roles.

The MG4 appears in Battlefield 4.

The MG4 is a collectible weapon found in Baku found in the assorted pipes on the way to extraction, just after Hawkins arrives. It is equipped with a Reflex, Magnifier, Muzzle Brake and Bipod. It sports a Worm Autumn finish.

It is the last machine gun to be unlocked for the Support kit.The MG4 has a firerate of 800, magazine size of 200 and a moderate recoil. In all statistics, the gun is identical to the M249, except it has a different recoil pattern.

The MG4 unlocks the US attachments by default and can acquire the Chinese and Russian variants through Battlepacks only.

The MG4 with Bipod attached.

The MG4 being used in first-person, equipped with a Holographic Sight and a Magnifier.

The MG4 was a weapon cut from Battlefield Hardline. Its textures, weapon image, and customization files were all included in the Open Beta, suggesting it was likely cut very late in development, possibly after light-machine guns were moved from the Enforcer kit to Battle Pickups. Its texture file is identical to its Battlefield 4 counterpart. 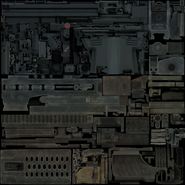 The MG4's weapon texture. The 221 on the belt cover is also present on Battlefield 4's MG4.