The MP-412 REX is a .357 Magnum Russian double action revolver designed by Izhevsk Mechanical Plant in the late 1990s. It was designed for export (REX: Revolver for EXport), but never put into full production due to lack of a market.

The MP412 is a weapon featured in Battlefield: Bad Company.

The MP412 can be found alongside of Middle Eastern Coalition sniper rifles, specifically with the GOL. It is very effective, and kills enemies in two shots.

The MP412 is the companion sidearm for the Middle Eastern Coalition Recon kit. It has a capacity of 6 rounds, balanced out by high power, requiring 3 body shots to kill. Because its rate of fire is identical to that of the other pistols, the MP412 can kill significantly faster than the M9 or MP443, making it arguably the best handgun in the game. The GOL is always accompanied by the MP412.

The MP412 in Battlefield: Bad Company in the multiplayer map Oasis

"A 6 round revolver revered for its close range edge and notable Magnum firepower. Its top break design is a throw back to old 6-shooters of the "Wild West"."

The MP-412 REX is an all-kit weapon featured in Battlefield: Bad Company 2 and is unlocked at level 12. It has a 6-round capacity and has the least spread and second highest damage out of any hand-held weapon in the game (second only to the sniper rifles), but is balanced by its low rate of fire, small magazine size, long reload time, and heavy recoil.

At close range, the MP-412 REX, with Magnum Ammunition equipped, is capable of a two-shot kill with body shots, as well as a one-shot kill by a headshot.

The MP-412 REX at Harvest Day in Conquest.

The MP-412 REX in the hands of a Russian SPECACT Recon.

The MP-412 REX being aimed by a Russian SPECACT Recon. 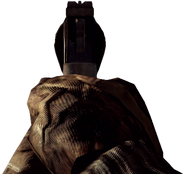 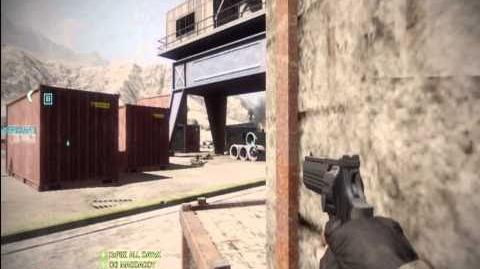 "A 6 round revolver revered for its close range edge and notable Magnum firepower. Its top break design is a throwback to old 6-shooters of the "Wild West"."

The MP-412 Rex is a weapon featured in Battlefield Play4Free and can be purchased in the game store. It has a low rate of fire and high kick, but the firecap is low enough for the kick to be negligible.

It does the highest damage per shot out of any gun in the game, only excluding bolt-action snipers, killing in three shots at close range. However the gun's low rate of fire and high kick make it hard to use at long range, when multiple shots are needed to kill an enemy.

for unlimited use, but a one-day trial of this gun is available for each class of every player.[1]

Symthic
"Developed for export in Russia (REX stands for Revolver for Export), the MP412 is a compact .357 Magnum handgun with an interesting tilt open and auto extraction design. While not as powerful as the .44 Magnum, the .357 Magnum round from the MP412 offers excellent stopping power and the compact package offers a slightly higher rate of accurate fire."

The MP412 REX is an all-kit weapon featured in Battlefield 3. It deals high damage and will kill enemies in 2-5 rounds, depending on distance. At close range, a headshot with the MP412 will always kill an enemy in 1 shot. It's worth noting it has a slightly worse hip fire accuracy than the other pistols except the automatics at 1.25.

The MP412 REX is unlocked for multiplayer, when an overall score of 5,000 points is achieved in Co-Op and is the first weapon to be unlocked within the mode. 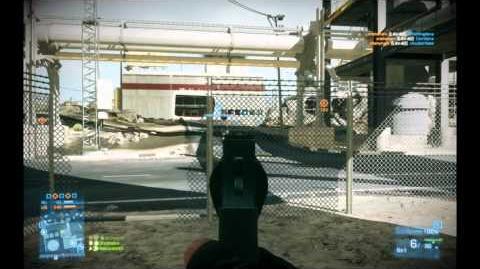 The MP-412 REX is a revolver featured in Battlefield 4.

It features the second highest damage and third fastest bullet velocity of any pistol secondary in the game, being beat out in both stats by the .44 Magnum. However, the MP-412 REX has a faster rate of fire and faster reload than the .44 Magnum, and does not need to be unlocked in multiplayer through pistol score.

Both the MP-412 REX and .44 Magnum, being revolvers, can not equip suppressors due to the escape of gases in the mechanism. It is unlocked for both singleplayer and multiplayer upon the completion of the Tombstone Actual assignment by completing the mission Baku.

The MP-412 REX is the only Pistol available for the player to use in the entirety of the campaign. With the exception of Baku and Kunlun Mountains, Recker starts every mission with a SCAR-H as a primary and the MP-412 REX as a secondary. The MP-412 is equipped without attachments and sports no paint.

It has extremely high power, able to kill enemies in 1-2 shots, regardless of difficulty level. This can make it a competent backup weapon for close to medium range.

The MP-412 REX has high power and high accuracy, and can take down an enemy in 2-4 shots. It can equip all handgun attachments other than Suppressors. Its high damage is balanced by the high vertical recoil and low rate of fire. It is best suited for medium range, where its accuracy and power can be most effective; the .44 Magnum is better suited for longer range.

It is also worth noting the MP-412 REX in Battlefield 4 features much sharper iron sights and faster bullet velocity than in Battlefield 3, but its rate of fire is significantly decreased. 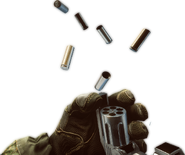 Two versions of MP412 REX are featured in Battlefield 2042. Available exclusively in the Battlefield Portal.

6 rounds
"The Russian-made "revolver for export" chambers the .357 round with a 6 round capacity. It is a high damage, but being a revolver, it is low capacity and requires more time to reload."