Not to be confused with the MP5

The MP5KA4 (German: Maschinenpistole 5 Kurz, English: Machine Pistol Model 5 Short) is a variant of the German MP5 developed in the 1980s, and both weapons are produced by Heckler & Koch. The MP5KA4 fires the same 9x19 Parabellum round used in the standard MP5 from either 15-round standard or 30-round extended magazines.

The M5K appears in Battlefield Play4Free as a purchasable SMG for the Engineer class. M5K has 4 24-round magazines, 3-round burst fire mode, and rate fire of 1200 RPM, which makes short work of any enemy at close quarters. This weapon is very compact, so reloading and ADS time are very fast. Also, it is the only weapon with burst-fire capability for engineer class.

[1] - retrieved August 30, 2012
[2]
"A tactical machine pistol based on one of the world’s most successful submachine gun designs. With the shoulder stock completely removed and the shortened receiver, this ultra compact personal defense weapon is capable of very high rates of fire, as well as great stopping power at close range."

The M5K is a weapon introduced in the Battlefield 3: Close Quarters expansion and is unlocked upon the completion of the Hold the Trigger assignment. It was first seen in the Close Quarters Gameplay Premiere trailer.

Its ballistic characteristics are similar to the PP-2000, with the same damage and range, but with a much higher rate of fire and increased recoil. Due to these factors, engagements with the M5K should be kept at short ranges. Burst firing can help at long range, but the high damage drop off as well as high horizontal recoil makes this weapon unfavorable for range as it will take up to 9 shots to kill an uninjured foe.

The iron sights on the M5K are very clear and sharp, and easy to acquire targets with at the ranges it should be used at. The weapon features Automatic, Semi, and 2-round burst modes. It's worth noting both hipfire and aimed accuracy of the M5K is slightly worse than other PDWs.

The M5K in first person

The MP5K, being used by a Russian Assault soldier before being killed in the Donya Fortress Domination Trailer 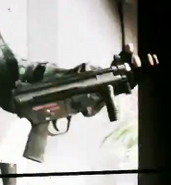 The M5K when dropped, note that the magazine disappears

High Quality Render of the M5K

M5K's reloading animation
Add a photo to this gallery

34 - 12
"The MP5K is a shortened version of the MP5 used by security forces and law enforcement worldwide. This gun is extremely short and lightweight, making it faster to bring to bear than larger firearms."

The MP5K is a weapon featured in Battlefield Hardline. It is the default Sub-machine issued to both factions for the Mechanic kit. It is equipped with a Micro T1, Suppressor, and Extended Magazines by default and features a permanently attached Stubby Grip.

The MP5K being held in first-person

The MP5K being reloaded
Add a photo to this gallery

Retrieved from "https://battlefield.fandom.com/wiki/MP5K?oldid=375558"
Community content is available under CC-BY-SA unless otherwise noted.