The MP7 is a German Personal Defense Weapon (PDW) made by Heckler & Koch. Its 4.6x30mm cartridge gives the weapon excellent capabilities against body armor, while remaining compact enough to easily conceal. This gun was designed in response to NATO's requirement to replace the 9x19mm Parabellum.

The 9x19mm round was not capable of penetrating body armor, and the 4.6x30mm solved this problem. It is essentially a scaled down assault rifle round, offering superior body armor penetration. The HK MP7 is the direct competitor to the FN P90, and uses a scaled down version of the G36 gas system. Its proprietary cartridge is also used in HK's canceled UCP, much like how the P90's 5.7mm bullet is used in the FN Five-seven pistol.[1]

2
"The MP7 is part of a new breed of personal defense weapons intended to replace traditional side arms or submachine guns. The MP7 is issued to troops who would not normally carry an assault rifle (such as vehicle pilots or crew members)."

The MP7 is a Tier Two submachine gun in Battlefield 2 and the default weapon for the SAS Engineer in Battlefield 2: Special Forces. It possesses both automatic and semi-automatic fire modes, with a relatively high rate of fire at 900RPM. Its damage is average for the submachine guns and its spread values are, like the other submachine guns, are slightly above-average. However, it does have a fairly high magazine size at 40 rounds. 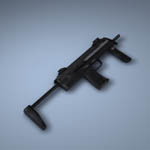 3D model of the MP7 in Battlefield 2

3D model of the MP7 in Battlefield 2

The MP7 is a purchasable machine gun featured in Battlefield Play4Free for the Engineer kit. The MP7 excels at close ranges as it has a slightly higher rate of fire, decent deviation and low recoil.

The MP7 also comes with a decent amount of starting ammunition and is on par with most SMG's in this regard. It, along with the MP5 has the fastest bullet velocity for a submachine gun at 700 meters per second, meaning users will not have to adjust for bullet drop or lead as much as other players using different weapons.

. Two other variants, the Veteran MP7 and Elite MP7 are also available. Both variants perform differ asethically than the normal MP7 and have increased magazine size and damage.

The MP7 in Battlefield Play4Free.

MP7 elite's variant
Add a photo to this gallery

http://symthic.com/?s=bf3
http://www.ign.com/wikis/battlefield-3/MP7
"Another contender for the newly developing PDW market the MP7 is currently in service with the German Bundeswehr and the Norwegian Armed Forces. The MP7A1 includes an improved stock, additional safeties, and added rails for mounting lights, lasers, and sights. The weapon is also capable of being suppressed, giving it excellent close combat stealth performance."

The MP7 is featured in Battlefield 3 as a PDW.

The MP7 appears alongside the M40A5 in "Night Shift". It is equipped with a Holographic Sight, a Suppressor and the Extended Magazine attachment. It is used by Kaffarov's guards in the Kaffarov mission.

It can also be found in "The Great Destroyer" with Extended Magazines, IRNV Scope, Laser Pointer, and a Flash Suppressor.

In co-op, it is the starting primary weapon for both players in "Hit and Run". It can also be found on some enemies in the same mission.

The MP7 is unlocked for multiplayer when an overall score of 34,000 points in co-op is reached. Formerly (before the R3 patch) 189,000 points needed to be achieved in Co-Op. It is the third co-op weapon to be unlocked.

The MP7 has a high rate of fire, being the fastest fully-automatic primary weapon apart from the FAMAS. The damage is low, meaning even a few missed shots might let the target survive. This, coupled with the small magazine size, means that aiming down the sights is very important, even at close range. Unless the optional Extended Magazine attachment is equipped, which doubles the magazine's ammo capacity and changes the weapons reload animation, the gun is not suitable for taking on multiple targets, unless they are standing in very close proximity or one behind the other.

The MP7 also suffers from the most significant and most noticeable horizontal recoil in the game. Coupled with its extremely high rate of fire, the MP7 accuracy at range deteriorates rapidly, and even at medium ranges where horizontal recoil usually isn't a vital factor.

However, like other personal defense weapons, the MP7 has very accurate hip-fire accuracy. Paired with the Laser Sight and Extended Magazine, the MP7 becomes a very mobile and accurate weapon.

The MP7 in gameplay. 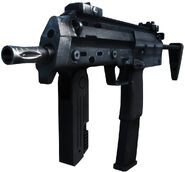 Left side of the MP7
Add a photo to this gallery

"Another contender for the newly developing PDW market the MP7 is currently in service with the German Bundeswehr and the Norwegian Armed Forces. The MP7A1 includes an improved stock, additional safeties, and added rails for mounting lights, lasers, and sights. The weapon is also capable of being suppressed, giving it excellent close combat stealth performance."

The MP7 is a weapon introduced in the Battlefield 4: China Rising expansion. It is unlocked upon the completion of the Make A Dent assignment. It features a built in Folding Grip, and as such, cannot mount any other underbarrel attachments. Similar to other PDWs that either have no underbarrel slot, or have a fixed attachement, it automatically gains the Ergo/Vertical grip modifier, meaning it has better mobility. 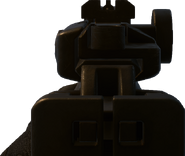 Retrieved from "https://battlefield.fandom.com/wiki/MP7?oldid=363997"
Community content is available under CC-BY-SA unless otherwise noted.