The Brügger & Thomet MP9 (Machine Pistol, 9 millimeter) is a Swiss selective-fire Machine Pistol first produced in 2001. The MP9 is a further development of the Steyr TMP, the design of which was purchased by Brügger & Thomet and then improved upon. The MP9 fulfills the role of being a compact, interim weapon between dedicated machine pistols like the Glock 18 and full-size Submachine guns like the MP5, being small enough to be held in one hand but capable of utilizing high capacity magazines. The MP9 is currently in service with several Law Enforcement agencies and militaries worldwide.

The MP9 is a Machine Pistol released with Battlefield Hardline: Betrayal, exclusive to the Law Enforcement Professional kit. It becomes available for purchase to Criminals after achieving 1,250 kills.

It is characteristically similar to the 93R, using a built-in foregrip and a magzine size of twenty rounds, but has higher recoil and spread. Unlike the 93R however, the MP9 is fully automatic and can equip a Stock, improving its recoil, or an Extended Magazine, allowing it to fire longer.

MP9 equipped with a Heavy Barrel and Stock 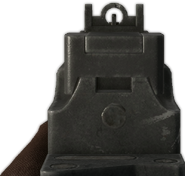 900 RPM
"The Swiss MP9 is a compact, short range submachine gun chambered for 9mm rounds fed from an extended 30-round magazine."

An MP9 appears in Battlefield 2042 as a primary weapon.