The MP 18 was a German submachine gun designed by Hugo Schmeisser and manufactured by Theodor Bergmann GmbH. It was among the first practical submachine guns used in combat, adopted by German Army in 1918 during World War I. Although production of the gun ceased at the end of the war, the MP 18 was a highly influential design and served as the basis for many future submachine guns. In 1928, an improved version of the MP 18, known as the MP 28, was introduced.

Damage drops off after 50 meters to 100 meters

Mp 18
The MP 18 is a weapon featured in Battlefield 1942, issued to the Imperial Japanese Navy and Red Army Medic kits.

The weapon has a high rate amongst all infantry weapons at 540 rpm, but with a lower damage per shot compared to assault rifles and light machine guns available to the Assault kit. It requires four shots to the body to kill at minimum range, and seven at one hundred meters and beyond. Although the MP 18 has low recoil per shot, during sustained firing its high rate of fire can make controlling the weapon difficult, throwing the user's aim up and to the left or right. This, along with high spread deviation with long shots, makes the MP 18 a poor choice for long range engagements, at which the gun is only semi-effective even when fired prone and in bursts or single shots. As with other submachine guns, the MP 18 is, therefore, better suited to close-quarters engagements, as well as shooting on the move thanks to its weapon type having the lowest max spread deviation.

When comparing the MP 18 to the allies Thompson, both weapons have identical spread, damage and recoil patterns, and only differ in reload time and magazine capacity, with the MP 18 being slightly faster by 0.5 seconds, and with two more bullets in the magazine. The Thompson, however, surpasses its counterparts in rate of fire, at 600 rpm versus 540 rpm of the MP 18, giving the Thompson a slight edge when up close. The MP 18 and MP 40 are identical in terms of stats and function.

The MP 18 in first person

A Soviet soldier firing the MP 18 at Stalingrad

The Lucky Sprayer is a weapon featured in Battlefield Heroes for the National Army Soldier class. It is the equivalent of the Royal Army Side Feeder.

This item has a Codex entry: MP 18

This item has a Codex entry: Elite MP18

"The MP 18 was one of the first practical submachine guns to see combat. Highly effective at its role it was nicknamed the "grabenfeger" by German soldiers."

The MP 18 is a weapon featured in Battlefield 1 for the Assault kit.

The MP 18 is used heavily by German Empire infantry in every campaign mission they appear in. The weapon may also be found in the hands of certain Austro-Hungarian Assault soldiers, although this is very rare. Some captured MP 18s can be seen in hands of Bedouin insurgents in Nothing Is Written. The variant utilized is the Trench variant but lacks a bayonet.

An MP 18 Factory variant can be found on German Assault soldiers, with presumably the ability to regain accuracy quicker like other Factory variants.

The MP 18 is a primary weapon for the Assault kit. Its great hipfire accuracy provides the user with an advantage over non-assault players when gas is present or in close range, as the ability to hipfire the MP 18 accurately results in much more consistent kills than with other classes' weapons. Its low rate of fire and low recoil makes it an easy weapon to handle out to medium ranges, but conversely, makes its time to kill rather slow. Three variants of the MP 18 are featured in multiplayer: Trench, Optical and Experimental.

The MP 18 Trench variant is the starting primary weapon of the Assault Kit. This variant has the best hipfire accuracy out of the three, which is a given for all Trench variants.

The MP 18 Optical variant is equipped with a lens sight. It offers a marginal increase in aimed accuracy but a lower hipfire accuracy compared to the Trench variant.

"Equipped with a lens sight and a three round burst trigger group, this SMG pattern offers improved aimed accuracy and reduced recoil."

The MP 18 Experimental variant differs from the other two in that it features a three-round burst as its only fire mode. This version grants a further increase in accuracy (if the player is standing still) and horizontal recoil control over the Trench and Optical variants, but has the same hipfire accuracy as the Optical. It is equipped with the same weapon modifications as the Optical variant, but the reload time is notably slower. As of March 13, 2018, the CTE version of the MP18 Experimental has a stick magazine instead of a drum magazine, and the same change had been implemented into the regular game with 2018 Easter update.[3] This brings the bullet count to 30, instead of 32, as to avoid a two-round burst at the end of use.

The MP 18 is carried against this soldier's hip in the Battlefield 1 boxart.

MP 18 during the EA Play livestream

First person view of the optical and experimental variants 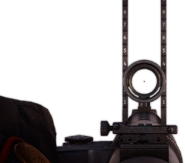