The MP 18 is a Codex Entry featured in Battlefield 1. It is unlocked upon obtaining 10 kills with the MP 18. 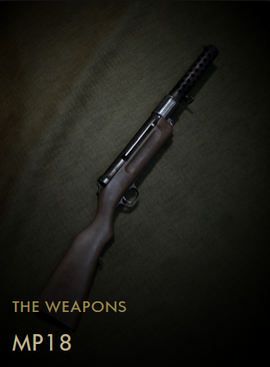 The Imperial German Army needed a compact and effective weapon for fighting in the trenches. The result was the MP18. Developed during 1917, the weapon was produced in large quantities and used by the German Stormtroopers. It is considered the world's first practical submachine gun and would set the standard for many future designs.

Retrieved from "https://battlefield.fandom.com/wiki/MP_18_(Codex_Entry)?oldid=343117"
Community content is available under CC-BY-SA unless otherwise noted.