Not to be confused with the SAR-21
The Israeli Weapons Industries (IWI) MTAR-21, or Micro Tavor, is a standalone military weapon used for close quarters combat. It is designated to use the 5.56x45 NATO cartridge and the Indian 5.56x30 cartridge. It is also compatible with the German 9x19mm cartridge. The weapon is renowned around the world for its efficiency in close quarters combat and its ability to use a variety of munitions. It is currently operated as the Micro-Tavor in the IDF and the Zittara in the Indian Military.

Fully automatic
The MTAR-21 appears in Battlefield Play4Free as a buyable weapon for the Engineer class.

The MTAR-21 in the Play4Free store.

Complete My Own Terminator assignment

http://symthic.com/charts.php?class=2 Retrieved Sept. 17th
[1]
"This bullpup carbine is the ultra-compact version of the Israeli army standard TAR-21 rifle. It features supreme ergonomics and handling due to its 590 mm (23.2 in) length and is intended for use in tighter environments where standard length rifles become cumbersome. As of 2009, it is destined to become the standard rifle of the IDF, and is also seeing success internationally as part of security and police forces."

The MTAR-21 is a weapon introduced in the Battlefield 3: Close Quarters expansion and is unlocked upon the completion of the My Own Terminator assignment. It was first seen in the killfeed of the Donya Fortress Gameplay trailer.

The weapon is more suited to very close range engagements, with the highest rate of fire of all the carbines. It suffers from considerable recoil and low damage at range, as well as poor accuracy, limiting its ability to perform at medium ranges. It is very effective as a hipfire weapon at closer ranges, especially if using a laser sight, killing in four shots to the average PDW's five shots. However, it must be noted the longest reload time of any available carbine at 3 seconds if reloaded with a bullet chambered, meaning that players must be highly aware of their surroundings while using this weapon.

Also, it has the second highest bullet velocity of any carbine (the M4A1 Carbine having the highest), although the high recoil and poor accuracy prevent it from being effective at long ranges.

Battlefield Premium members may equip the Airman or Woodland Oak camouflages upon the completion of the MTAR-21 Specialist assignment.

0.34
0.42 ┴ 0.42
Carbine
The MTAR-21 is a weapon featured in Battlefield 4: China Rising and is available to all classes. It is unlocked for PC and console players upon the completion of the Multi Talent assignment.

Compared to the Battlefield 3 variant, the MTAR-21 is a very versatile carbine. It has a high rate of fire of 900 RPM and controllable recoil. Even at a distance, one can kill effectively with no barrel attachments. In close quarters combat, the MTAR-21 is devastating. Thanks to its high rate of fire, the highest among the carbine class, and tight hipfire (because of its bullpup nature), the MTAR-21 kills extremely quickly. Its primary downside is its long reload time. Coupled with a quick magazine drain, reloads will be long and frequent. In the end, it is a solid all-class weapon that could turn any role into both a close range killer and an effective mid-long range support weapon. 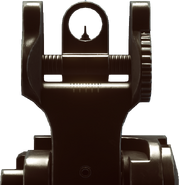