The Beretta MX4 Storm is a submachine gun chambered in 9x19mm Para, with a barrel length of 12 inches. It is select-fire, with an automatic rate of fire of about 800 rpm.

The MX4 can use standard 92FS pistol magazines, or its own 30 round magazine. It has in integrated full-length rail for mounting various attachments.

The MX4 is a PDW featured in Battlefield 4.

The MX4 is unlocked by completing the Silver assignment in South China Sea by scoring 6000 points. It features a Kobra, Flash Hider and Stubby Grip. It sports a Worm Urban paint.

It is the default weapon for the Engineer class, and comes equipped with a Reflex sight, Laser Sight, and Ergo Grip. It has above average power for a PDW, with a moderately high rate of fire, and medium-high (but manageable) recoil. Overall, it is a balanced PDW for close-medium range. 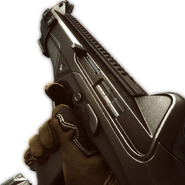 The MX4 is a submachine gun introduced in the Battlefield Hardline: Betrayal expansion.

Retrieved from "https://battlefield.fandom.com/wiki/MX4?oldid=362903"
Community content is available under CC-BY-SA unless otherwise noted.