The Madsen MG is a Codex Entry featured in Battlefield 1. It is unlocked upon obtaining ten kills with the Madsen MG. 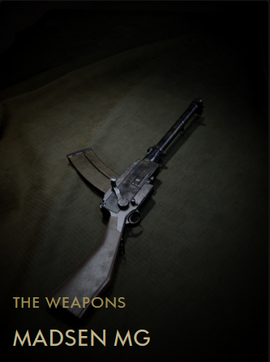 The Madsen is one of the first true light machine guns, designed in Denmark in 1899. It is a magazine-fed, air-cooled weapon with a complex and unusual recoil-operated mechanism, making it expensive to produce for its time. Despite this the weapon was of high production quality and usually performed well.

The Madsen first saw service in the Russo-Japanese War of 1904 to 1905, and was produced in great numbers and sold to over 34 countries before and after WW1. Production of the Madsen finally ended in the 1950s, but the weapon continued to see extensive action around the world, even being used by Brazilian Military Police into the 21st century.

Retrieved from "https://battlefield.fandom.com/wiki/Madsen_MG_(Codex_Entry)?oldid=369021"
Community content is available under CC-BY-SA unless otherwise noted.