"You know that whole "criminal psychopath" thing? These dudes method-act that shit, man."

— Boomer to Nick in "Out of Business".

Marcus Eugene Boone, better known as Boomer is a character featured in Battlefield Hardline. Serving as an intelligence analyst in the US military during the Iraq War from 2004 to 2006, Boomer went AWOL in 2007 and joined the criminal trade to act as an IP specialist for a variety of nefarious characters. Despite being a gray hat hacker, Boomer strives to do good and is willing to capitalize on such an opportunity once his old friend Khai Minh Dao gives him the chance.[1]

He later partners with Nick Mendoza to get revenge on the corrupt law enforcement personnel who framed them after a drug bust gone wrong. Boomer finds that Nick generally gets him into dangerous situations where he might end up dying, but as long as he makes it out in one piece and gets paid, he will do whatever is necessary.[2]

Marcus "Boomer" Boone was born in the mid-1980s, his father died at an unknown time and his mother's status is unknown. He became skilled in technical equipment and computers at an early age. Boomer would join the U.S. Army working as an IT analyst and served between 2004 and 2006 in the Iraq War.

In 2007, Boomer became "screwy", causing him to go A.W.O.L. and was dishonorably discharged (but as of his status to the forces, is unknown, leaving him to still be A.W.O.L.). Boomer then went to the Mojave Desert to keep low and met Dune Alpert, whom he started a serious relationship with,[3] the relationship was abolished by her father, Tony Alpert, when he tried to leave with Dune (or by her words kidnap her). Alpert ran him off and later kept his hatred for Boomer personal.

Boomer returned to Los Angeles to act as an IT Specialist and Freelancer for variety of criminals, doing robberies,[4] etc. He eventually ran into Detective Khai Minh Dao who gave him a chance to redeem him self (and second chance). At this point, he went off the grid from the law, but kept his criminal activities constant.


Boomer was called by Khai to help her take down Julian Dawes and Carl Stoddard and to get information from Henry Kang. Agreeing, she told him he would meet Tyson Latchford and her "friend" Nick Mendoza at Kang's car dealership. Boomer download data from his laptop from Mr. Kang's drug car dealings but was caught, and put into a car for the car crusher. He was saved by Nick and told him whom he told of his data was in his car across the guards.

Nick left him in the car, but he escaped and hid in his and Tyson's car, waiting for them. The trio then drive across the metro from Kang's men, upon succeeding. Boomer than told the duo of how drugs were coming in, and told them where Kang's hideout was, the trio stop there and kill all of his men, ending Dawes' association and letting Lily Kang free with Roark.

Main Article: Episode 7
Boomer later got Mr. Kang's invitation in Neil Roark's residence on Mount Olympus. Khai and Nick go in, but Boomer gave her a device to knock out security cameras and lights, the mission went successful with Nick's plan to rob Dawes' by tracking a brief case full of money, but causing three million dollars worth of damage.

Returning to the Mojave DesertEdit

Main Article: Episode 8
Boomer collected blue-prints from Khai's hidden phone in the money, revealing that Dawes was keeping his dirty money in corporate HQ in Miami. Six months prior a safe was installed, however, explosives cannot be used to open the safe as the amount required would level the building. Boomer contacts an old friend from the Mojave Desert to help them get the Autodialer that could crack open the safe.

Nick, Boomer, and Dune go to Tony Alpert's compound, upon entrance, they are held at gun point and held bounty by Stoddard in L.A. Captured, Dune gives Boomer a lock pick to escape the compound. The duo escape, defeating some members and drive away with Dune. The trio crash after Dune jokes about the bounty with her revolver, the get access to a tank, and defeat Mr. Alpert, getting "The Brute".

Main Article: Episode 9
The group was getting ready to go to Dawes' corporate HQ, when they are ambushed by Stoddard and his men. Tyson is held at gun point by Stoddard, as Khai attacks him. Boomer gives Nick an extra magazine (since Nick's gun jammed) and kills him. The group stands over Stoddard, as his phone rings, Boomer shoots the corpse out of fear. Julian calls Stoddard, but Nick sends pictures of Stoddard's corpse as a message update to let him know they're making progress towards him.

The group go into corporate Headquarters as Boomer watches everything on camera in a van. Tyson, dressed as a window washer to find the correct water pipe line gets the group to the 19th floor to give him C4. Upon doing so, water fills half the building, and get the brute to crack the safe. Boomer tells them that Preferred Outcomes soldiers are coming and attack the group, defending the Brute. Tyson is injured by a bomb trigger when the safe opens, and is launched down to Boomer who returns to the boat, the group leaves as Nick takes them out to Dawes' HQ for unfinished business.

Main Article: Episode 10
Afterwards, the group goes to Dawes' HQ where Nick wants to exact his revenge. With Tyson injured from the bomb trigger in the safe, Nick orders Khai and Boomer to take him to a black market doctor. Agreeing, they leave as Nick goes in alone, Boomer tells Nick he's sorry they didn't get the score, but both agree on "next time". It ends with Nick killing Dawes and gaining his fortune afterwards. 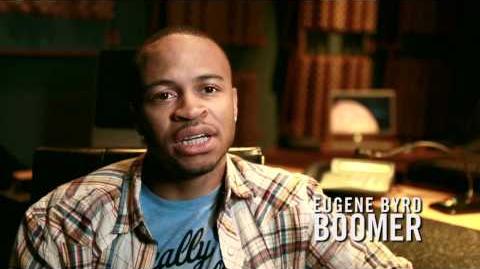 Boomer with a G17 in Sovereign Land.

Boomer's Dossier
Add a photo to this gallery

Retrieved from "https://battlefield.fandom.com/wiki/Marcus_Boone?oldid=373612"
Community content is available under CC-BY-SA unless otherwise noted.