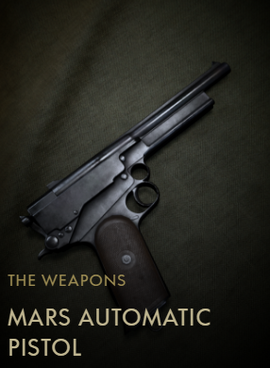 The Mars Automatic Pistol, designed in England in 1898 and sometimes called "the Desert Eagle of WW1", was in its .45 caliber version the most powerful handgun in the world up until the middle of the 20th century.

The Mars pistol was an experimental design that between 1901 and 1903 was submitted to military trails several times, but was ultimately rejected by the British War Office. One of the competitions between the handguns tested were penetration tests, where the C96 pistol penetrated eleven planks and the Mars pistol won by penetrating sixteen planks, demonstrating its tremendous power, and its accuracy was also impressive.

But in all the test the Mars also revealed its downsides: 25% heavier and 30% larger than the M1911, the Mars was an absolute beast of a gun. It was too heavy and too complex. Its unique long recoil rotating bolt-action ejected spent cases straight back, sometimes into the shooter's face, and when firing the pistol, the giant bolt of the gun would pass halfway over the forearm of the shooter. It had a hard trigger pull, excessive muzzle flash and heavy recoil. Observers of the test described the Mars as looking more like a firearm exploding than being fired, and shooting the pistol was described as "singularly unpleasant and alarming".

The designer of the weapon was unwilling to make alterations to the design, and only 81 Mars Automatic Pistol had been made when production stopped in 1907.

Retrieved from "https://battlefield.fandom.com/wiki/Mars_Automatic_Pistol_(Codex_Entry)?oldid=343158"
Community content is available under CC-BY-SA unless otherwise noted.