Mass Destruction is a level in Battlefield 2: Special Forces . It is set during a Spetsnaz assault on a Rebel chemical weapon production facility.

"The Spetsnaz have recently discovered activity around an abandoned factory in southern Russia. Reconnaissance teams have discovered that Rebels have brought the factory back online with the intent to develop chemical weapons. The Rebels must be removed, and any found materials returned to Mother Russia for further investigation!"

The Spetsnaz Starting base, it as the name says takes near the shore with a broken down boat and a rusty pier, like majority of the Vanilla Battlefield 2 maps, the base can be captured by the enemy.it spawns a Technical and a Quad Bike

The Chemical Weapons Factory is the closest base to the starting Spetsnaz base, the flag is located in the western wing of the building, mostly close range battles in narrow hallways that make sub-machine guns and shotguns effective. In the flag area itself, catwalks can lead to the second floor and some areas behind the fuel containers.

It should also be noted the Spetsnaz UAV trailer is right beside the building to the south.

The Rebel Starting base is in a scrapyard on the north side of the map. The majority of the base consists of broken cars and cargo containers. This area is mainly close quarters, lending itself to close-range firefights. This base spawns a Technical and a Quad Bike. 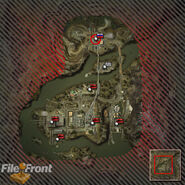 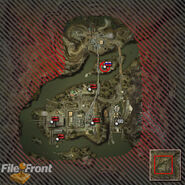 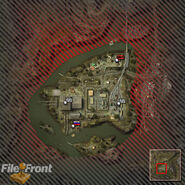 16-player singleplayer variant
Add a photo to this gallery
Retrieved from "https://battlefield.fandom.com/wiki/Mass_Destruction?oldid=318892"
Community content is available under CC-BY-SA unless otherwise noted.