Mata Hari is a Codex Entry featured in Battlefield 1. It is unlocked upon killing the last living member of a squad. 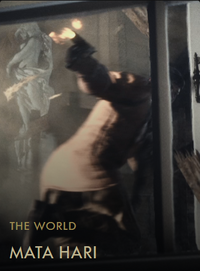 In the years leading up to World War I, the tension between the European powers fueled suspicions that foreign agents could undermine national security. Most of the countries involved developed organizations dedicated to the gathering of information on military secrets. The White Lady network based in Liege, Belgium provided the Allies with information on German troop trains. Encrypted messages were sent by carrier pigeons across the lines. Spies also employed a range of techniques like invisible ink and cameras hidden in perfume bottles.

"A COURTESAN, I ADMIT IT. A SPY, NEVER!" MATA HARIEdit

France had a major spy scandal in 1917 when evidence of German payments to the anti-war movement in the country surfaced. Among those arrested was a famous exotic dancer Mata Hari. Sharp, intelligent, and fluent in several languages, she denied any involvement.

She was tried and executed on October 15 by a firing squad. Her guilt is still debated and shrouded in mystery.

Retrieved from "https://battlefield.fandom.com/wiki/Mata_Hari_(Codex_Entry)?oldid=343146"
Community content is available under CC-BY-SA unless otherwise noted.