watch 03:41
Wiki Targeted (Games)
Do you like this video?
Play Sound

Matteo Cocchiola is an Italian character featured in the singleplayer campaign of Battlefield 1. He is the twin brother of Luca Vincenzo Cocchiola, the protagonist featured in Avanti Savoia!.

In Avanti Savoia!, Luca was ordered to cover Matteo's battalion as he broke through Austro-Hungarian lines to capture a fortress situated deep in the mountains. After a bombing run that caused a massive rock slide, Matteo went missing. His worried brother began the trek to search for him at the fort and downhill from that fort. Eventually, after searching through several dead men who were a part of Matteo's battalion, Luca, who was giving into hope that he escaped, found his lifeless body on a large rock, and began mourning the loss of his brother.

An old picture of Matteo 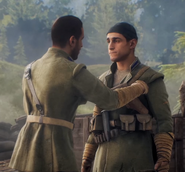 Matteo with his twin brother Luca

Luca mourning Matteo
Add a photo to this gallery

Retrieved from "https://battlefield.fandom.com/wiki/Matteo_Cocchiola?oldid=376477"
Community content is available under CC-BY-SA unless otherwise noted.