"The Mechanic started off as a pure vehicle-based role, but vehicles are somewhat less prominent in Hardline, so it evolved over time. Where it is right now is a pretty sweet spot. Being the “gadget guy” means he gets an eclectic collection of useful toys, but he still retains his importance in vehicle-based maps and modes. A great complement to the Operator, as his close-range SMGs can destroy nearby enemies effectively."

The Mechanic kit is a playable kit featured in Battlefield Hardline. It fulfills the role of the Engineer class from previous installments, charged with the upkeep of vehicles. Unlike most other Battlefield games, however, it does not have access to AT-launchers such as the RPG-7V2 and FIM-92 Stinger, with its Anti-Tank influence limited to grenade launchers. Also, due to the game's smaller emphasis on vehicles, the kit has been given exclusive access to numerous gadgets that were previously only available to other classes such as the Satellite Phone or Armored Insert.[1]

The kit is vehicle centric, equipped with a Repair Tool to keep friendly vehicles up and running while also having access to grenade launchers and the ability to Sabotage vehicles to destroy them with ease. The Mechanic's primary weapons are submachine guns, and is armed with numerous revolvers as a secondary. Like all kits in Hardline, the Mechanic can also equip a selection of Grenades as well as all kit gadgets like the T62 CEW, Grappling Hook, Zipline, and Gas Mask. Mechanics are the source of all advanced equipment and are therefore the most specialized one and an important class in a squad.

Armed with Submachine guns, the Mechanic can be a deadly force in close quarters. Submachine guns or Personal Defense Weapons are compact, light weapons that have an incredible hip fire accuracy and due to its light weight and are rapid fire weapons that are a force to be reckoned with in mobile close range. However their barrel length increases their damage dropoff and have pretty uncontrollable recoil when fired for long periods of time. So, these are best used when quickly hip firing while strafing around enemies in close-medium range.

The Mechanic's largest concerns, however, are vehicles. As the sole kit with access to the Repair Tool, Mechanics are the only members of the team able to repair vehicles. As a result, they are invaluable in keeping up key assets such as Mobile Spawn Point vehicles, Helicopters, and Counter Attack Trucks. Mechanics will generally be the ones piloting these vehicles to manage upkeep themselves; if not, then they'll usually be found repairing them from behind or from a passenger seat.

While the Mechanic is charged with maintaining friendly vehicles, they are also the most efficient at destroying hostile ones. The kit is armed with the M320 grenade launcher for the Law Enforcement and the M79 for the Criminals, and as a result can cause large amounts damage to street vehicles, if not outright destroying them. The Mechanic also has access to the Sabotage kit, which will cause vehicles to explode after being entered and driven away, although this can be disarmed with the Repair Tool. Lastly, the kit can also use the Tracking Dart, which will mark vehicles for his team. Presumably, they will then be able to locked onto with Anti-tank launchers.

A group of three Criminals Mechanics (from the Thieves subfaction).

A Criminals Mechanic (from the Thieves subfaction) firing the UZI.

A Criminals Mechanic (from the Thieves subfaction) looking over at the pile of money from Blood Money.

A Criminals Mechanic (from the Thieves subfaction) working on a drill to open the vault on Heist at Bank Job.

A Criminals Mechanic (from the Bangers subfaction) planting the Sabotage kit on a Fuel Tanker. 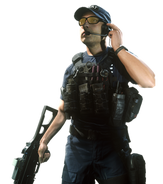 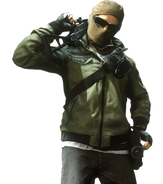