The Medkit is a small box or bag used/dropped by Medics to heal themselves and/or other soldiers on the battlefield that are within range. They are featured in every game in the Battlefield series except Battlefield 1943 and  Battlefield Heroes .

In Battlefield 1942, the Medkit is issued to all Medics. It is used to heal an injured player, all the way up to full health. It can be used to both heal the player possessing it as well as other wounded players. It can 'overheat', to avoid abuse of the medical bag, but it only "overheats" after a long time of consistent healing. Generally, players can heal a very large amount of health before it overheats.

In Battlefield Vietnam, the Medkit is uniquely issued to the Assault, Heavy Assault, and Scout kits for the MACV - Studies and Observations Group. It acts exactly as it does in Battlefield 1942, with the same model and animations.

In the World War II mod for Battlefield Vietnam, the medkit is issued to the USMC and IJA as a healing implement.

In Battlefield 2, the Medic Bag issued to the Medickit. It takes the form of a bag with medical supplies inside and strapped tight. It gradually heals player for a short period of time or can be thrown on the ground to instantly heal players to full health. A player can deploy a maximum of 5 Medic Bags on the ground before throwing the next one replaces the first one. The Medkits are also very useful as bait for enemy infantry.

The player can use one to lure an enemy toward a booby trap (e.g. a Claymoreanti-personnel mine). They can also be used to reset the bodies of severely wounded players which would normally be impossible to revive (e.g. if they are clipping or too far away from the soldier's kit).

In Battlefield 2142 the Medic Hub is issued to the Assault class. It can be thrown on the ground to heal nearby teammates (and enemies). Holding the hub increases the healing rate, though an "exhausted" hub cannot be thrown to the ground. A deployed hub will expire if its contents have been exhausted, enough time has passed, or it has received too much damage.

The Medic Hub deployed.
Add a photo to this gallery

In Battlefield: Bad Company, the Medkit is issued to the Support kit. The in-game health system has that players do not regenerate health over time. If a player is injured, a medic kit dropped nearby will be "consumed" by the player to heal themselves to full health over a short period of time (by 5 HP increments).

An unlimited number of medkits can be dropped by one player at a time.

The healing process can be interrupted by a single point of damage on the healing player.

In Battlefield: Bad Company 2, the Medkit is issued to the Medic kit. Players will slowly regenerate health over time, but if a Medkit is dropped nearby an injured player, it will speed up this process drastically, as well as provide the kit deployer with experience points.

The medkit returns as a medic-only gadget. It functions in a near-identical manner to its counterparts in other games, gradually restoring an amount of health. However, two alternatives to the medkit exists in Battlefield Play4Free which exist in no other game apart from their own counterparts in Battlefield Heroes, the field bandages and the adrenaline shot. If a medic puts points into the Training tree related to the medkit, they can improve the healing range and amount of health a kit can heal before disappearing, as well as the capability of placing two or three medkits at once.

Deploying the MedKit.
Add a photo to this gallery

Heal self and teammates
"A deployable Medical Kit provides healing over time to soldiers near the kit, greatly speeding the body’s natural healing processes. "

The Medic Kit is a gadget available in Battlefield 3 for the Assault kit. Unlike previous games, the medkit's healing effect does not stack—players receive the same high rate of healing regardless of how many medkits are nearby. If a teammate's medkit is nearby, it is marked with an icon with a bandage on the mini-map. Enemy medkits can be used as well with same effect, though they are not marked on the mini-map.

Players can opt for using the M320 or M26 MASS instead, sacrificing their healing ability for more firepower.

The medic kit can be placed on and in vehicles allowing them to become mobile healing points. The Medkit will disappear when the user deploys another one. They can also be destroyed by enemy gunfire or explosives. 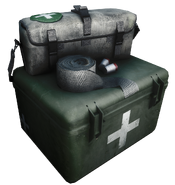 Medkit.
Add a photo to this gallery

Retrieved from "https://battlefield.fandom.com/wiki/Medkit?oldid=202373"
Community content is available under CC-BY-SA unless otherwise noted.