Not to be confused with the Battlefield: Bad Company 2 website, War Room

The War Room (also known as Metagame or Theater of War) is a mini-game featured in Battlefield Heroes. It was first announced on November 11, 2012 and was released on April 18, 2013.

The mini-game introduces strategy elements to the game with actions based on how well a faction performs in matches.

The Metagame is implemented on all servers. The following steps are needed in order to particpate in the mini-game.

Battles are influenced based on the overall score of a faction. This score is the collective number of the individual scores of all players in a faction. Score is obtained during match by performing the following actions:

How much score influences the current battle depends on the surrounding tiles and the troops on friendly and enemy tiles.

To prevent the enemy factions from advancing, players can cut off their supply lines by capturing the territories behind them and separating them from their HQ. This will make it very difficult for the enemy to keep up defenses on severed territories. The HQ does not lose its progress even if connection is lost.

Choose an adjacent tile to attack

Flanking the enemy territory adds an attack bonus, making it easier to capture.

The strength of the attacking/defending forces is represented by different icons.

Cut off territories are more difficult to defend.
Add a photo to this gallery

Battle loots are rewarded once a single tile battle has concluded. These can include items such as Valor Points, Treasure Chest keys, medals, or a trial to Premium. Battle loots have four levels which can be earned through gaining score on the tile. 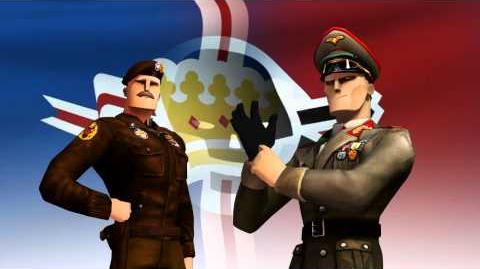 Winter map
Add a photo to this gallery

Retrieved from "https://battlefield.fandom.com/wiki/Metagame?oldid=363680"
Community content is available under CC-BY-SA unless otherwise noted.